To celebrate the release of Rebel Heart I'm thrilled to welcome Moira Young to the blog today to talk about the films that have influenced her writing. I had hoped to post my review of Rebel Heart later today but life and moving house kind of got in the way and I didn't quite manage it. I am half way through reading Blood Red Road though and loving it so far so keep an eye out for my reviews coming soon.

Before I hand over to Moira to tell you about some of the films that have influenced her writing I want to give you a bit more information about Rebel Heart:

There's a price on Saba's head.

They call her the Angel of Death. She defeated a tyrant, but victory has come at a cost. Haunted by the ghosts of her past, she needs Jack. His moonlit eyes, his reckless courage, his wild heart. But Jack has left, and a ruthless new enemy searches for Saba across the Dustlands . . .

Now please give a warm welcome to Moira Young as she talks about some of her favourite films and the way they have influenced her books! 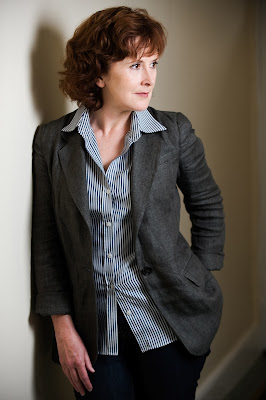 Moira Young
(Photo Copyright - Benjamin Harte Photography)
Movies have always been a powerful influence on me. I got off to a good start with what’s widely considered to be one of the finest movies of all time, The Wizard of Oz. I first saw it when I was four and it’s my greatest literary influence.

It’s a classic example of the hero’s journey, which can also be said of Blood Red Road and Rebel Heart. In fact, the action of Blood Red Road kicks off with a dust storm that sends Saba on her epic journey to find her kidnapped brother. This mirrors the twister at the beginning of The Wizard of Oz, which hurtles Dorothy out of her sepia Kansas home into the technicolour world of Oz and her journey along the yellow brick road. 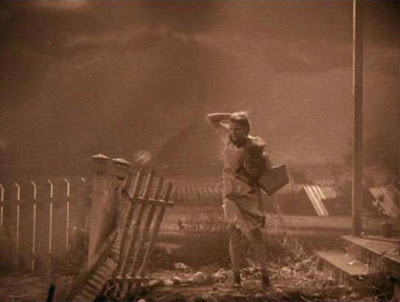 I’m beginning to suspect that this trilogy might be an extended riff on ‘The Wizard of Oz’
The first movie I ever saw in the cinema was Gone With the Wind. My dad took me – just him and me, no mum, no little sister. I was eight. It was unimaginably glamorous. The red velvet curtains, the plush seats, the smell of buttered popcorn. It was shown with an interval. As Scarlett O'Hara stood silhouetted against the sky, fist raised, and cried, “As God is my witness, I'll never be hungry again” and the curtains swept shut, I was so overcome with emotion and excitement that I was sick into my popcorn bucket. My love for visual storytelling on an epic scale stems from this experience. High romance. Great drama. Big canvas. 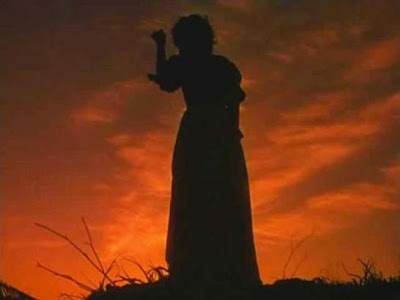 Uncannily similar to the paperback cover of Blood Red Road?
The most obvious cinematic nod for these books is to the Western. My dad is a fan, so I’m a fan too, and surely Westerns are the particularly American version of the hero’s journey. The touchstone for Blood Red Road is John Ford’s The Searchers, which features a flawed hero. People classify my trilogy as dystopian, but I intended to write a Western set in the future, so I’m sticking with my description! The original Star Wars trilogy is sometimes referred to as a Western set in space, and I would count the first two in my own personal top ten most influential movies. 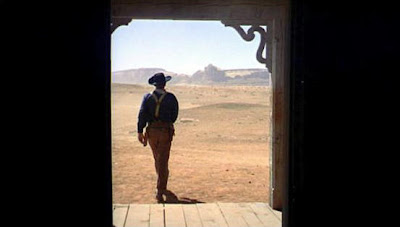 Ethan Edwards (John Wayne) walks away at the end of ‘The Searchers’
I wanted to write a page-turner of a book, a story that would be hard to put down. Here, I point to Raiders of the Lost Ark and The Last of the Mohicans: two very different movies, but both carry you along at a relentless, exciting pace, with epic sweeps of action, emotion and tension from start to finish. 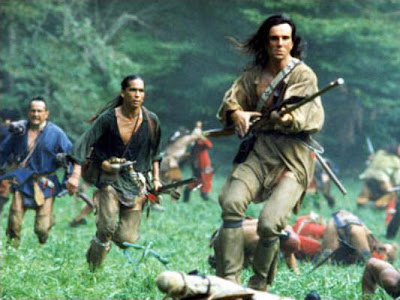 Hawkeye (Daniel Day-Lewis) fights his way out of an ambush
Movies have given me a rich visual imagination, so no wonder I write in a cinematic way. When my writing is going well, it's like there's a movie playing in my head and I just write down what I see and hear. Fingers crossed for Blood Red Road, the movie!


This concludes Moira Young’s blog tour. Find out more about Blood Red Road and Rebel Heart at www.facebook.com/bloodredroadbook
@Moira_Young
********************
Thanks so much for visiting today Moira, I'm definitely going to be thinking about these films while I'm reading the books now! This may be the last stop on Moira's blog tour but you can still check out the previous posts by visiting the other blogs who took part. Check out the banner below for more details.