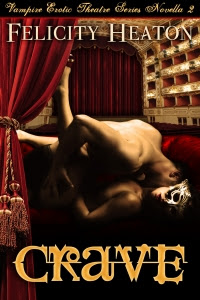 His mind has been set on his work for the past one hundred years. Now a forbidden beauty has stolen his attention and is threatening to steal his heart too.

Kristina is on the run from her pack. Her alpha is intent on forcing her to bear his child and she’s not about to live through the same nightmare as her mother had. When a tall, dark and sexy vampire catches her eye, she can’t believe the ferocity of the desire he unleashes in her or the fact that she enjoys the feel of his eyes on her and his silent pursuit of her in the clubs each night.

When Kristina finally gets a taste of Callum in a forbidden kiss, will she be strong enough to resist the allure of the vampire and his offer to share his bed for a week of unbridled, wild sex, or will she surrender to her own craving for the safety and passion she finds in his embrace?

As always Felicity Heaton has a way of pulling you into her world and making you connect with the characters from the very first page. We had met Callum in the previous story but it was great to get to know him better and see behind the workaholic to the lonely man underneath. He has a very caring and tender side and when he sets his sights on Kristina he will do anything to prove to her that they have a future together. Kristina is wary of strangers, scared of getting hurt and terrified that her pack will track her down and force her to return to them. She is vulnerable but she is also strong, strong enough to fight for her freedom and brave enough to flee from everything she knows to start her life again. It isn't easy for a wolf to be alone and away from her back but anything is preferable to being forced to mate with a man she doesn't want.

Callum knows he wants Kristina and he manages to push her just the right amount so that she doesn't get scared and start running but is forced to face her fear and deal with it. Their relationship starts out as a steamy night of sex but becomes much more as they become closer and learn to trust each other. If you thought that Javier and Lilah's relationship was hot you haven't seen anything yet! Callum and Kristina know exactly what they want and they both like to take control in the bedroom (and the bathroom and anywhere else you care to mention!) so it was fun waiting to see who would get to take the lead in each encounter.

Crave is a satisfying read that I would recommend to any paranormal romance fan, it made me immediately want to pick up the next book Seduce and I'm really looking forward to continuing with this series.