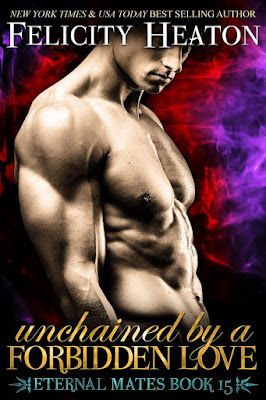 Lost to the darkness, Fuery wages a daily war against the corruption that lives within him, constantly in danger of slipping into the black abyss and becoming the monster all elves fear. Work as an assassin gives him purpose, but what reason is there to go on when he killed the light of his life - his fated mate?

Shaia has spent forty-two centuries mourning her mate. Tired and worn down, she agrees to wed a male of her family's choosing, following tradition that has always bound her as a female and hoping she will be able to gain just a little freedom in return. But as she resigns herself to being the mate of a male she could never love, fate places an old friend in her path - one who tells her that her lost love is alive.

Will Shaia find the courage to break with tradition and leave the elf kingdom in search of her mate? And as a ray of light pierces his soul again, can Fuery find the strength to win his battle against the darkness or will it devour him and that light of their forbidden love forever?

Review:
If you're a fan of the Eternal Mates series then you'll probably remember meeting Fuery before, he's one of the elves who is very, very close to giving into the darkness inside him and becoming completely lost to bloodlust. The only things keeping him going have been his bond with fellow assassin Hartt and seeing Prince Vail start to recover since meeting his fated mate Rosalind. Fuery is full of doubt and self loathing after certain events in his past have left him broken, he accidentally killed his fated mate in a fit of rage and doesn't believe he deserves forgiveness or redemption.

Shaia has been grieving for the mate she lost over four centuries ago and she has been kept from living a full life by a very overprotective family and a patriarchal society that believe women should be cosseted and looked after by the men in their lives. She is desperate to break free and make her own choices but when her family caught her at a low point they persuaded her to agree to marry a man of their choosing. The last thing she wants is to end up stuck in a loveless marriage and when an old friend gives her hope that the one thing she has always wanted more than anything might still be possible she has to face her fears and go searching for the happily ever after she deserves.

I'm a sucker for a broken hero so of course I've been waiting what feels like forever to get my hands on Fuery's book. He was so heartbreakingly sad and broken by the events of his past and even when he's confronted with the truth he is scared to believe it. The only thing that's kept him going this long is the strong bond of friendship he has with fellow assassin Hartt and I really loved the bond between them. I may have been a little annoyed by Hartt's actions at times when it came to Shaia but he was only ever trying to protect Fuery so I could forgive him for that and I really hope we get a story about him in the future. Shaia has spent her whole life being protected by her family and has never really had to face the world on her own but she's brave and determined so I enjoyed seeing her stretch her wings and fight for the things she wanted most. Their romance was surprisingly sweet considering the darkness Fuery has inside him and I loved seeing them work through their demons together.

Unchained by a Forbidden Love was another fab instalment to the Eternal Mates series and I'm already looking forward to the next one!