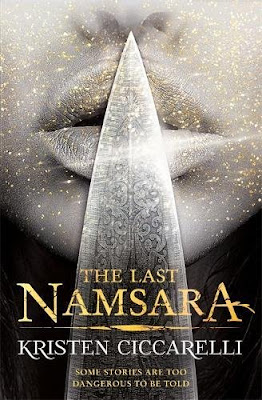 Destroyer. Death bringer. Dragon-slayer. I am more weapon than girl.

Asha is a dragon-slayer. Reviled by the very people she's sworn to protect, she kills to atone for the wicked deed she committed as a child - one that almost destroyed her city, and left her with a terrible scar.

But protecting her father's kingdom is a lonely destiny: no matter how many dragons she kills, her people still think she's wicked.

Even worse, to unite the fractured kingdom she must marry Jarek, the cruel commandant. As the wedding day approaches, Asha longs for freedom.

Just when it seems her fate is sealed, the king offers her a way out: her freedom in exchange for the head of the most powerful dragon in Firgaard.

And the only person standing in her way is a defiant slave boy . . .

THE LAST NAMSARA is an extraordinary story about courage, loyalty and star-crossed love, set in a kingdom that trembles on the edge of war.

Review:
Asha broke the rules as a child, she told the forbidden stories in the hills outside her city and it drew the attention of Kozu, the most powerful dragon in the kingdom. When she stopped giving him the stories he wanted Kozu flew into a rage, nearly burning Asha to death and destroying half of the city with a rain of fire. Ever since then Asha has been haunted by what happened and has desperately tried to make amends to her people by hunting and destroying the dragons. If she can only find and defeat Kozu her people will be safe and she might even be able to avoid the arranged marriage between her and the commander of her father's army, Jarek.

I love dragons so of course any book about them automatically ends up on my wish list but I have to admit I was a little disappointed when the opening scene starts with Asha capturing a dragon and cutting it's head off - I prefer my dragons as regal allies rather than vicious enemies! Luckily it doesn't take long to figure out there is much more to this story than a one girl mission to kill as many dragons as possible though. Asha is a complicated character, she knows her father hates the old stories but they are a way for her to feel close to the mother she lost as a young girl so they bring a comfort to her even when she knows they could cost her everything. We get to learn snippets of these stories at the beginning of each chapter and they're well worth paying attention to because they give us hints at what is really going on in the rest of the story.

Asha isn't the easiest character to like in the beginning, she's very stubborn and quite closed off to those around her but she's had to become that way to guard herself after everything that happened when she was a child. The entire city blame her for what happened to them and people look at her with fear and hatred wherever she goes so she has no choice but to brazen it out rather than crumble under their disapproval. She goes on a real emotional journey throughout the story learning to trust her own instincts and to question everything she's always been told about both her past and the dragons. I really enjoyed the changes in her and admired the way she stood up for what she believed in even when the price of failure would be so high.

Her only allies have been her brother Dax and her cousin Safire. For much of the story Dax seemed pretty useless but he actually has his own secrets and becomes much more interesting as you start to uncover what is going on with him, I'm really hoping we'll see more of his side of the story as the series continues. Safire was a very positive influence on Asha, she's been treated terribly because of her heritage but she's fierce and determined and she's Asha's biggest ally. Then you have Torwin, the slave boy who Asha frees at great personal risk to herself. He's another great character and one who has an important role to play in showing Asha the truth of what is really going on around her.

The Last Namsara is a brilliant debut and although it doesn't end on a cliffhanger I'm eager to dive back into his world to find out what happens next. Kristen Ciccarelli is definitely an author to watch out for.

Source: Received from Gollancz in exchange for an honest review.