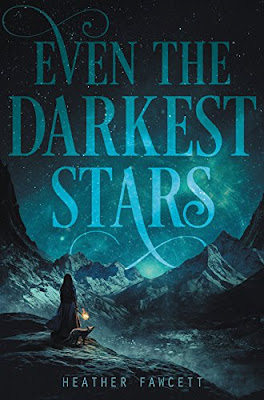 The first in a sweeping and action-packed debut fantasy duology loosely inspired by the early climbers of Mt. Everest—perfect for fans of Cindy Pon and Alison Goodman.

Kamzin has always dreamed of becoming one of the Emperor’s royal explorers, the elite climbers tasked with mapping the wintry, mountainous Empire and spying on its enemies. She knows she could be the best in the world, if only someone would give her a chance.

But everything changes when the mysterious and eccentric River Shara, the greatest explorer ever known, arrives in her village and demands to hire Kamzin—not her older sister Lusha, as everyone had expected—for his next expedition. This is Kamzin’s chance to prove herself—even though River’s mission to retrieve a rare talisman for the emperor means climbing Raksha, the tallest and deadliest mountain in the Aryas. Then Lusha sets off on her own mission to Raksha with a rival explorer who is determined to best River, and Kamzin must decide what’s most important to her: protecting her sister from the countless perils of the climb or beating her to the summit.

The challenges of climbing Raksha are unlike anything Kamzin expected—or prepared for—with avalanches, ice chasms, ghosts, and even worse at every turn. And as dark secrets are revealed, Kamzin must unravel the truth of their mission and of her companions—while surviving the deadliest climb she has ever faced.

Review:
Even the Darkest Stars is a fantasy story set in a fictional version of the Himalayas where magic, witches and demons are real. As the youngest daughter of the village chief Kamzin has spent her life training to become the next Shaman but magic isn't something that comes easily to her and all she really wants to do is become an explorer like her late mother was. When one of the Emperor's elite royal explorers comes to the village to prepare for an expedition to Raksha everyone expects Kamzin's sister Lusha to be chosen as his guide but when Lusha vanishes River turns to Kamzin to help him on his journey instead. This is a dream come true for Kamzin and a chance for her to prove herself but the trek is going to be more perilous than she ever could have imagined and she's going to have to make some very difficult decisions along the way.

I absolutely loved the setting of this book, the lush mountains are described beautifully and are like extra characters in the story, particularly Raksha, the largest mountain in the kingdom, one that nobody has been able to reach the summit of and the one that Kamzin must help River conquer. The thrill of the climb and the dangers they face along the way kept me completely hooked and it felt like I was right there with them on the climb. This is a fairly slow build story though, a lot of major plot elements aren't explored until quite late in the game and certain revelations made towards the end of the book change the way you look at everything that went before it. I actually enjoyed the slower pace here though and the way Heather Fawcett took the time to build her world and bring her setting to life in front of us.

Kamzin is a great character, she can be a little self-centred and tends to focus on her end goal at the cost of missing things along the way but her heart is in the right place and she just wants the chance to prove herself and make her father proud of her. I admired her determination and the way she just wouldn't quit no matter how many obstacles were thrown into her path. I could have done without the dreaded love triangle but it wasn't the main focus so I can forgive it. River was an explorer like Kamzin, he loved taking risks and I could definitely see the appeal because they had so many common interests but I also really liked her childhood friend Tem so it's hard to pick between them. Tem was less of a risk taker but he was just as brave, in fact I'd almost say he was braver because he was facing his fears because he wanted to protect Kamzin, he wasn't the strongest climber but he bought his own set of skills and they wouldn't have made it as far as they did without him.

I really enjoyed Heather Fawcett's debut novel and I'm looking forward to seeing how Kamzin's story ends in All the Wandering Light later this year.