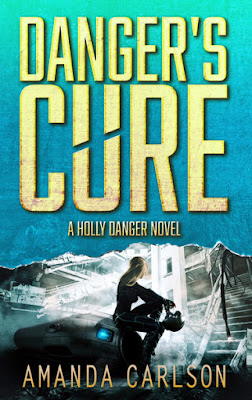 Before it’s too late…

Holly and her crew are on a quest to uncover the locations of the medi-pods following the clues Roman left behind, hoping to find at least one that hasn’t been destroyed before the government catches on.

The only problem is, someone already has. Strange UACs are popping up all over, and in order to take them out, the crew risks exposing itself.

When they do, what they find is chilling. The secret government group has a dark purpose. Holly and her friends have no choice but to launch an all-out war to set things to rights. But some factors have already been set in motion, and undoing them might take too much time and come at too high a cost.

Review:
This series is just getting better and better, Danger's Cure sees Holly and her friends working together trying to track down one of the high-spec medi-pods that has the capability of curing the seekers. Unfortunately they're not the only ones hunting for them and with time running out for Mary the stakes have never been higher.

We see more of the group working together in this instalment and things get pretty dicey for them as a rogue government agency does everything it can to stop them finding the cure. There is more going on with the government than meets the eye so Holly and her friends are facing danger on all sides now. We finally start to see Case open up more about his background, even if it was reluctantly, but I'm glad that he seems to be coming more of a fully trusted member of the crew. It's understandable why they've been wary of him in the past but I'm hoping that now they know more about him they'll find it easier to trust his intentions. Daze as always steals the show and I love how they're all like a big, slightly dysfunctional family.

The action is really ramping up and we're learning more about this world all the time which makes for great reading. These are the kind of books I can pick up and easily devour in one sitting so I'm really glad that it's only a couple of months until book 5, Danger's Hunt, is being published. If you like Amanda Carlson's urban fantasy books you should definitely give this futuristic dystopian sci-fi a try!