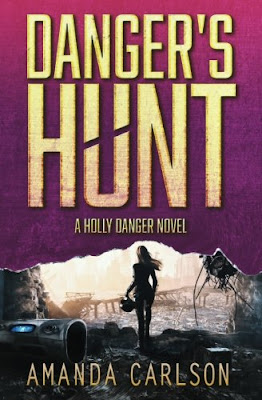 The hunt is on…

Holly won’t rest until the outskirt is found. The militia who kidnapped him believe they have the upper hand, but they know nothing about what Holly carries in her pocket. With the status reader, Case is as good as found.

But once she arrives, things get dangerous fast. Tillman and his crew are expecting her. There’s nothing left to do but break through the walls before it’s too late. But what Holly finds is beyond shattering.

Once they arrive South, it’s a race to save the outskirt’s life. The scientists have some tricks up their sleeves, but time might run out before danger descends. When it does, they barely have time to make it out alive.

Review:
Each new book in this series ramps the stakes for Holly and her crew even higher and that's no exception in Danger's Hunt. What starts as a rescue mission when Holly goes after the militia group who captured Case quickly evolves into so much more when the group uncover some huge revelations. This whole series has been fast paced and full of action but this book is another game changer and the more we uncover the more hope we start to feel for the future of humanity.

It's so hard to review the fifth book in a series that's as intertwined as this one because talking about even minor events in this instalment can give major spoilers for previous books. This is one of those series that you have to read the books in the correct order - you'd really be missing out if you started here - but it's been such a joy to read that I'd highly recommend getting hold of Danger's Halo as soon as possible.

Fans of the series will love this latest instalment, I've waited a long time for some of the things that happened in this story and I love how all of the team have their own role to play. Holly is as brilliant as ever, Masie also added plenty of humour and her character had some brilliant developments and Daze stole the show as always. We find out a lot more about Case's background and we get to see all of Holly's original crew members (Bender, Lockland & Darby) working together towards a common goal. The direction the series is heading is a really interesting one and I'm definitely looking forward to getting my hands on the next book!