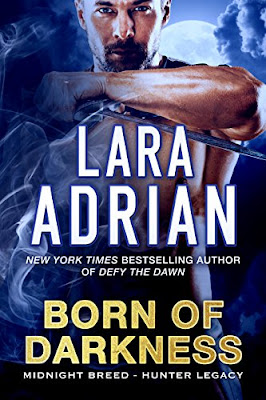 As a former assassin in the Hunter program, Asher is one of a small group of Gen One Breed vampires who survived the horrors of a madman’s laboratory and the cruelty of the training that made him one of the most lethal beings in existence. Now, twenty years after his escape from those hellish origins, Asher is a loner whose heart is as cold as his skills are merciless. But when he thwarts a killing under way in the middle of the desert outside Las Vegas, Asher meets a beautiful woman who draws him into a deadly game against powerful enemies—one that will test both his skills and his tarnished honor.

Naomi Fallon is used to getting out of dicey situations. Orphaned as a child after her mother’s murder, she didn’t survive twenty-six years on the street without using up most of her nine lives. But when her latest caper lands her in the Mojave against a Vegas gangster’s henchman, she’s certain her number is up. Then he appears—immense, brutal, and far from human. Naomi’s never needed anyone’s help, least of all one of the Breed. But after one risk too many, only a man with Asher’s skills can keep her safe. Yet the solitary, seductively handsome vampire has enemies of his own, and a secret that will not only shatter her faith in him but her heart, proving what she’s feared all along—that trust is only an illusion and love may be the sharpest weapon of all.

Review:
Born of Darkness is the first book in Lara Adrian's new Hunter Legacy series, a spin of set in the same world as her bestselling Midnight Breed books. Each of these stories are going to be standalone paranormal romances so you don't have to be familiar with the original series to enjoy them but longtime fans will appreciate the chance to spend more time in this world and to find out what happened to the many Gen One Breed Hunters bred and trained by Dragos.

It's been 20 years since Asher escaped from his hellish upbringing in the labs and he prefers to live a pretty solitary existence in an isolated home in the middle of the desert. He's never really forgiven himself for the things he was forced to do as a child and he's barely kept in contact with any of his siblings. Naomi lost her family when she was only a child, her mother was murdered and her time in the system ended with her living on the streets fending for herself. She does whatever it takes to survive and help protect the other children she cares about but her latest scheme has left her in more danger than ever before. When Asher comes to her rescue he plans to just drop her at the nearest hospital and be done with her but when he realises she is a Breedmate he is honour bound to protect her until the danger has passed.

This was the perfect blend of romance, action and suspense and a brilliant start to a new series. Both main characters were great they may have had difficult backgrounds but with work they were able to turn their lives around. Asher is a loner who is wary of letting anyone get close because he worries they'll blame him for his past but Naomi is open and warmhearted and does everything she can to help others who are in a similar situation to her. It takes a while for Asher to open up but inside he's just as protective as Naomi and he has brilliant instincts. They're both strong characters who refuse to back down so there are plenty of fireworks between them but I think that just made their romance even more passionate.

I love the Midnight Breed world so it was a joy to dive into this story even though we don't actually see any characters from the main series. I'm looking forward to getting to know more of the Hunters and I hope we'll see more of Asher and Naomi again too, I'd like to see him rebuild his relationship with his brothers a little and I think Naomi is the perfect person to help him do that. I have a feeling we've already met at least one half of the next couple and I'm definitely looking forward to their story too.