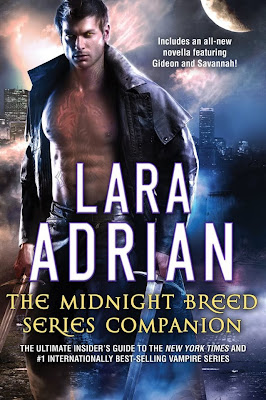 Part human, part otherworldly, the Breed has lived among humankind in secret for thousands of years . . . and now fans of the popular, best-selling Midnight Breed Series can delve deeper than ever before into this hidden, seductive race of vampires and the dark,thrilling universe they inhabit.

A book that's been years in the making, the Midnight Breed Series Companion includes insider info on all of the novels, author notes on the creation of the story world and how the eleven-book (and counting!) series has evolved since its beginning as a contracted trilogy, a complete character guide, series trivia, questions from readers and more.

This special series companion also includes "A Touch of Midnight" - an all-new, never-before-published, original novella featuring Gideon and Savannah, which finally reveals the story of how this reader favourite couple met and fell in love, and answers many questions that fans have been curious about since the series began!

Review:
The Midnight Breed Series Companion is a must read for any fans of the series. If you've ever wanted to know what inspired Lara Adrian to write the series, her secret thoughts about the characters and her vision for the future of the series then you'll find all of that and more in this book. You need to be aware that the series companion does contain spoilers for the first 10 books in the series (up to and including Darker After Midnight) though so if you're not up to date then you need to read it with caution. The companion has taken a lot of the information that we've learnt over throughout the series and put it into one easy to access guide but it also includes lots of little extras that you won't have seen before.

I wanted to read this book mainly for Gideon & Savannah's story in the A Touch of Midnight novella but I also really enjoyed learning more about the background for each book, how Lara went about creating the world and her series law as well as seeing her answer so many reader questions. There is a section which includes character profiles for everyone we've come across so far - from the most minor characters who died in the very first book right through to our favourites who we've come to love over the space of ten books. I think the character guide is going to come in really handy when I'm struggling to remember the history of one of the more minor characters but I do wish it had included the new generation who were introduced in Edge of Dawn because they are the ones I don't know as well and have more trouble keeping straight in my mind.

The A Touch of Midnight novella is set several decades before Kiss of Midnight and is the long awaited story of Gideon and Savannah's meeting. I have loved this couple since the very first book so I can't begin to tell you how excited I was to finally read their story and I enjoyed every second of it. The story is set in the 70's and I thought Lara has done a fabulous job of creating the atmosphere of that time period. It was fun to see Gideon when he was a full on warrior going out and kicking rogue butt, I'd always wondered why he now remains on the compound and away from the action and my questions have now been answered.

I'm not going to talk about the plot for the story because it would be too easy to give you spoilers so I'm just going to say that I now love these characters more than ever. Savannah is a smart young woman who has an unusual ability and it was nice to learn more about how her Breedmate gift works. She is thrown in the deep end when touching an object gives her a horrifying glimpse of the Breed, she doesn't understand what she has seen and it is up to Gideon to explain things to her. Gideon is as fabulous as ever, he is protective of Savannah and you get to see a glimpse of the funny computer geek we already know and love. As you'd expect their meeting is anything but straightforward, especially when Gideon's nemesis has Savannah in his sights, but they are a brilliant couple.

I did feel that the romance moves a little too quickly but that didn't bother me as much as it usually would, party because I know things have to move faster in a novella than they would in a full length novel but mainly because I already know these characters so well and am fully invested in their relationship. This is a great addition to the series and it was nice to get another glimpse into the pasts of the core members of the Order (Lucan, Tegan, Dante, Con, Rio and of course Gideon). By the time I'd finished reading the novella I was seriously tempted to re-read the whole series again, in fact I may just have to do that before Crave the Night is released next year.

Source: Ebook received from the author in exchange for an honest review