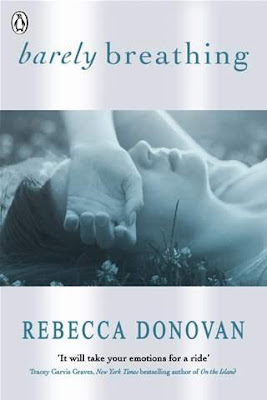 Will the promise of a passionate love mend Emma's broken heart?

The scandalous secrets of Emma's past life have been revealed, but she still has so much to learn. Why did her mother leave her all those years ago?

What really happened the night Emma's father died - and were her memories of being happy just a dream?

The repercussions of one horrific night have affected everyone involved. Now Emma has the chance of a new love - but will she let the past haunt her for good?

Breathing Series:
Reason to Breathe
Barely Breathing
Out of Breath

Review:
Please note that this review will contain spoilers for the first book in the series so don't read any further if you haven't already read Reason to Breathe. This is a fabulous, heart-wrenching series though so it's definitely one I'd recommend giving a try.

Emma's life has changed beyond recognition in the six months since her aunt tried to kill her, she is now living with her best friend Sara which means she finally has a safe place to call home. Although she is struggling to cope with the aftermath of what happened to her she has a lot of support from her boyfriend Evan, Sara and Sara's family but she finds it hard to open up and completely let any of them in. Emma has so many unanswered questions about her past so when her mother gets back into contact with her claiming she has changed Emma wants to give her a second chance. She decides to move in with her mother so they can spend time getting to know each other again but has her mother really changed though or is Emma just opening herself up to a whole new world of trouble?

I really enjoyed Reason to Breathe and after the huge cliffhanger ending I was pleased that I didn't have to wait before I started Barely Breathing. I had absolutely no idea what to expect from this story but I was hoping that things would finally start to turn good for Emma. The abuse she had been through was bound to have had lasting effects on her both physically and emotionally though and I felt that Rebecca Donovan did a fantastic job of portraying that. Emma is embarrassed by the fact that the whole town now knows her darkest secrets and she hates the pitying stares and attention she now receives because of it. She just wants to fade back into the background and get on with her life. I felt so badly for Emma during the last book, I actually wanted to climb into the book and murder her aunt so I was so relieved to see that she was now staying with Sara and I was nervous when she decided to move in with her mother. I just wanted to see her happy and living in a stable environment and I had such bad feelings about her mother.

As it turns out living with her mother was almost as bad as living with her aunt had been just in a very different way. Her mother is incredibly needy emotionally and acts like a child herself most of the time, she also turns to alcohol as a coping mechanism and although she isn't violent like Emma's aunt she has a vicious mouth on her and she was very good at verbally attacking Emma. It was hard to watch how Emma puts up with everything her mother throws at her because she thinks she deserves it. There were times when I was practically begging her to talk to Sara and Evan about what was going on but I could understand her reticence to do so. She is so used to keeping secrets and she is so emotionally overwrought from everything that she has gone through that it was understandable that she was pushing away the people who care about her the most. I may not like that fact and I was hurt on behalf of her friends, Evan in particular, by the way she treated them at times but I could see that it was a self defence mechanism that Emma didn't really even understand she was using.

I don't want to go into any more detail about the story so I'll just tell you that Barely Breathing is just as hard hitting as Reason to Breathe was but in a different way. I'm pleased that Rebecca Donovan didn't take the easy way out and make things all sunshine and roses for Emma. As much as Emma deserves some peace and happiness it was never going to come easy for her after everything she's been through. She needs time to heal herself emotionally and as much as the ending gutted me in a lot of ways I think she is going to come out stronger because of it. I absolutely can't wait to see how things play out in Out of Breath. As it's the final book in the series I have high hopes that Emma will finally find her own happily ever after but I have a feeling she's got more to face before she gets there.

Source: Received from Penguin in exchange for an honest review.