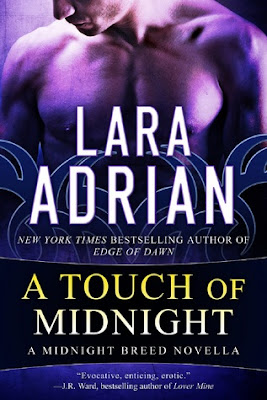 Savannah Dupree is halfway across the country from her Louisiana bayou hometown, a freshman studying at Boston University on a full scholarship. But academic excellence is only one of Savannah’s gifts. She possesses something even more remarkable than her quick mind and insatiable curiosity for learning. With a simple touch, Savannah can see an object’s past—a skill that puts her life in danger, when her studies bring her into contact with a centuries-old English sword and the secret hidden within the blade’s history: the vicious murders of twin boys by a group of fanged creatures borne of the worst kind of nightmare.

In all his three hundred years of living as one of the Breed, vampire warrior Gideon never dreamed he’d see the blade again that spilled his young brothers’ lives ages ago on that blood-soaked night in London. Ever since the boys’ deaths, Gideon’s been on a personal quest to rid the world of Rogue vampires, but now he can’t help wondering if the brutal slayings of his only kin was something more sinister—an act perpetrated by an unknown enemy. An enemy who is apparently living in hiding somewhere in Boston. There’s one certain way to prove Gideon’s suspicion, but it will mean using innocent, gifted Savannah to help uncover the full truth—a truth that will shatter everything she knows about herself and the world around her. And with danger closing in from all sides, the passion that ignites between Gideon and Savannah will tempt them to risk their hearts and lives for a love that might just last an eternity . . .

Review:
The A Touch of Midnight novella is set several decades before Kiss of Midnight and is the long awaited story of Gideon and Savannah's meeting. I have loved this couple since the very first book so I can't begin to tell you how excited I was to finally read their story and I enjoyed every second of it. The story is set in the 70's and I thought Lara has done a fabulous job of creating the atmosphere of that time period. It was fun to see Gideon when he was a full on warrior going out and kicking rogue butt, I'd always wondered why he now remains on the compound and away from the action and my questions have now been answered.

I'm not going to talk about the plot for the story because it would be too easy to give you spoilers so I'm just going to say that I now love these characters more than ever. Savannah is a smart young woman who has an unusual ability and it was nice to learn more about how her Breedmate gift works. She is thrown in the deep end when touching an object gives her a horrifying glimpse of the Breed, she doesn't understand what she has seen and it is up to Gideon to explain things to her. Gideon is as fabulous as ever, he is protective of Savannah and you get to see a glimpse of the funny computer geek we already know and love. As you'd expect their meeting is anything but straightforward, especially when Gideon's nemesis has Savannah in his sights, but they are a brilliant couple.

I did feel that the romance moves a little too quickly but that didn't bother me as much as it usually would, party because I know things have to move faster in a novella than they would in a full length novel but mainly because I already know these characters so well and am fully invested in their relationship. This is a great addition to the series and it was nice to get another glimpse into the pasts of the core members of the Order (Lucan, Tegan, Dante, Con, Rio and of course Gideon). By the time I'd finished reading the novella I was seriously tempted to re-read the whole series again, in fact I may just have to do that before Crave the Night is released next year.

Source: Ebook received from the author in exchange for an honest review