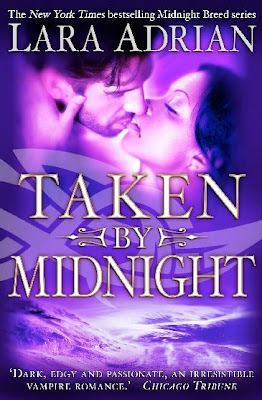 At the crossroads of death and desire, a woman tastes a pleasure no mortal is meant to survive . . .

In the frozen Alaskan wilderness, former state trooper Jenna Darrow survives an unspeakable breach of body and soul. But with her narrow escape comes an even greater challenge. For strange changes are taking place within her, as she struggles to understand--and control--a new hunger. To do so, she will seek shelter in the Boston compound of the Order, an ancient race of vampire warriors whose very existence is shrouded in mystery. Perhaps the most mysterious of them all is Brock, a brooding, dark-eyed alpha male whose hands hold the power to comfort, heal . . . and arouse.

As she recovers under Brock's care, Jenna finds herself drawn to the Order's mission: to stop a ruthless enemy and its army of assassins from subjecting Earth to a reign of terror. Yet in spite of their resolve, a purely physical relationship without strings soon binds Brock and Jenna together with a desire fiercer than life and stronger than death itself--until a secret from Brock's past and Jenna's own mortality challenges their forbidden love to the ultimate trial by fire.

Review:
Taken by Midnight is the 8th book in the Midnight Breed series so although this review won't contain spoilers for this story it may include information from previous books.  You might want to skip reading this review if you're not up to date with the series.  If you haven't discovered this series yet then it is one I would highly recommend, it is by far my favorite paranormal romance series & the books have continued to improve with every new release with Taken by Midnight now my new favorite book in the series.

This story continues right after the ending of Shades of Midnight with Jenna having just been rescued from the Ancient who was holding her prisoner in her home in Alaska.  She has been taken back to the Order's compound in Boston to recover and is being cared for by her best friend Alex and the warrior Brock.  Brock has the ability to take away people's pain by absorbing it into himself which is something that Jenna has been badly in need of during her recovery.  Since her escape from the Ancient Jenna has been going through some surprising physical changes, nobody knows quite what is happening to her and it is up to the Order to try and solve the mystery.

Anyone who knows me can tell you that I'm a massive fan of this series, it was my first introduction to the world of paranormal romance but remains a firm favorite.  People tend to compare this series to JR Ward's Black Dagger Brotherhood series and although there are some similarities I only really found that noticeable in the first couple of books.  These are both series that I love but for me the Midnight Breed series comes out on top in any direct comparison.  Lara Adrian writes great stories with fabulous romance and and interesting, suspenseful story arc that has had me hooked from the beginning.  I love the fact that both the heros and the heroines have important parts to play in the overall story and we get to see all of the previous characters make regular appearances.

Jenna is probably my favorite of Lara's heroines, she is a strong character who has been through a lot but has managed to survive.  She's a tough cookie who has always had to work extra hard in her job as a police officer to prove she is as good as any man and she doesn't like to show any weakness or want to have to rely on anyone for help.  Although she has a tough outer shell she is much softer underneath and could really use a bit of looking after and Brock is the ideal man for the job.  Both of them have suffered from losses in their lives and understand how the other is feeling - they really are the perfect match for each other.

Brock is a newer member of the Order and one that we hadn't been given much information about until the last book in the series.  We know him as a tough warrior who loves trading snarky comments with Kade but in Taken by Midnight we get to see a much more sensitive side to him.  He is so caring towards Jenna and some of the scenes between them will melt your heart.  The passion between them is intense from the start (the shower scene is particularly memorable!) but neither of them are looking for long term commitment.  Their relationship develops in a completely believable way and I loved watching Jenna and Brock together.

As for the ongoing war between the Order and Dragos things are really hotting up so expect plenty of action on that front.  We get the answers to some of the questions raised in previous books but there are also new questions raised & I'm particularly looking forward to finding out more about what is happening with Jenna and the effect that may have in the future.  I enjoyed the build up for Hunters book which is coming next, he is a really interesting character and I'm looking forward to meeting the woman who will get under his skin.  There were some great scenes with Hunter and Brock but I especially loved one scene with Hunter & Mira where we get to see a new side to the aloof warrior.  It seems like a really long wait until Deeper than Midnight!

Source: I received an ebook ARC from Lara Adrian in exchange for an honest review but I've already pre-ordered my copy to take pride of place on my shelves with the rest of the series.

Other Reviews:
That's What I'm Talking About
If you have reviewed this book on your blog please leave a link to your review in the comments & I'll add the link here.