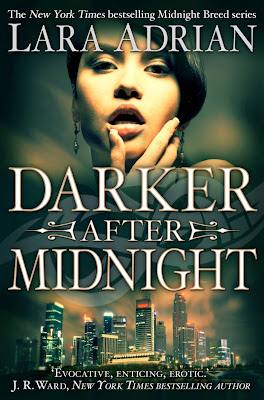 In the dark of night, a blood war escalates within the hidden world of the Breed. After existing in secret for many long centuries, maintaining a fragile peace with the humans who walk beside them unaware, a single act of retaliation has put the entire vampire nation at risk of discovery. It falls to the Order—a cadre of Breed warriors pledged to protect their own and humankind alike—to stop Dragos, the power-mad vampire at the centre of the conflict, before his push for domination can explode into catastrophe.

At the centre of the Order’s quest is Sterling Chase, once a morally rigid enforcer of Breed law, now a warrior fallen from grace, whose biggest battle is the one he wages against his own savage nature. With addiction beckoning him toward eternal darkness, Chase’s path to redemption has never seemed more out of reach. But when his eyes meet those of Tavia Fairchild, a beautiful witness who identifies him at the scene of a mission gone terribly wrong, Chase finds himself drawn to the woman—and convinced she is something much more than she seems.

Pulled into a vortex of intrigue and danger she can neither resist nor understand, Tavia is uncertain whom to trust. And while everything sane and logical warns her against getting close to Chase, she cannot deny that the handsome, deeply haunted male stirs something primal and ravenous within her. But even as she surrenders to her cravings, nothing can prepare her for the shattering truth of who—and what—she truly is.

As the Order’s enemy mobilises for the battle of the ages, Dragos and his Minions unleashing a hell on Earth like nothing ever seen before, Chase and Tavia are thrust into the heart of the violence. With time running out and the streets running red with the blood of innocent lives, both Breed and human, together Chase and Tavia must find a way to defeat Dragos once and for all—or die trying.

Review:
It's no secret that I'm a massive fan of the Midnight Breed series, in fact I'm happy to say it's my favourite adult paranormal romance series!  I'm always desperate to get my hands on the next installment and because I'm such a big fan I always have high expectations.  Lara Adrian hasn't let me down yet and she always manages to make each book better than the last.  Darker After Midnight is no exception and I can't begin to tell you how awesome this book actually is, in fact I'm still struggling to put into words just how much I loved it.  Although this review won't contain spoilers for Darker After Midnight please note that this is book 10 in the series and it is impossible to write a review without mentioning events from previous books so you may not want to read further if you're not up to date with the series.  If you're new to the series then I can't recommend it highly enough, although each book can probably be read as a stand alone I would highly recommend reading them in order starting with Kiss of Midnight.

The story picks up immediately after the ending of Deeper than Midnight, Chase has given himself up to the human police to allow the rest of the Warriors to escape from the compound with their mates.  He is on the verge of blood lust but is trying to redeem himself after the trouble he has caused for his friends recently.  Tavia is working for a senator who has just become Dragos' latest minion, she was a witness to Chase's attempt at assassinating Dragos and their paths cross again when she comes to the police station to identify him.  It doesn't take long for Chase to discover that Tavia is not all that she seems and he quickly realises just how important she is for the future of the breed.  Dragos is after Tavia but that is the least of their problems as he has much bigger plans, plans that will cause complete chaos for all of the breed.  Can Chase and the Warriors stop him in time?

I think I'm in the minority when I say I wasn't a massive fan of Chase, it wasn't that I didn't like him - he just wasn't my favourite Breed male.  It wasn't until towards the end of Deeper than Midnight that I really started to get excited about reading his story but I really loved him by the end of his book.  For someone who was such a stickler for the rules Chase fell a long way as he came closer and closer to giving into his blood lust.  He knows he has let down his friends at the compound and is scared to act on his feelings for Tavia in case he ends up hurting her.  He is embarrassed by his actions in the past and wants to be able to earn back the trust of Lucan and the others but doesn't really know where to start.  Tavia really surprised me, I had suspicions about her before the big reveal but really didn't have a clue what was to come.  It shocked the heck out of me but I mean that in a good way!  She was a great heroine and although she was wary of Chase and the other warriors she stood up for herself and didn't sit back and wait to be looked after.

There are so many things going on in Darker After Midnight that I really couldn't put it down.  Alongside the romance between Chase and Tavia we get to see a lot more of the other Warriors and their mates.  There were some scenes between Lucan and Gabrielle that melted my heart and reminded me just why I love him so much, there was also a conversation with Lucan and Tegan that brought tears to my eyes and I really want to just start reading the whole series again from the beginning.  Dragos has some shocking plans that cause complete chaos for all of the warriors and things will never be the same again after this installment.  The action was breathtaking and it was impossible to guess what would happen next and the ending actually left me in tears of happiness.

I panicked for a few minutes because this book wraps everything up so well that it could easily be the end of the series and I'm really not ready for the series to end!  I was happy to confirm that the series will continue but I believe that the focus will now move onto the younger generation of the breed with the next book being Mira's story.  Darker After Midnight is an unmissable installment to the series and one I can't recommend highly enough - this book will blow you away!  I for one can't wait to see where Lara Adrian takes us next and am already excited about Mira's book.

Source: I received an ebook ARC from Lara Adrian in exchange for an honest review but I've already pre-ordered my copy to take pride of place on my shelves with the rest of the series.