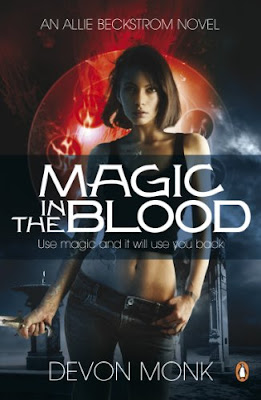 'Magic stirred in me, offering whatever I wanted.  With little more than a thought and a gesture or two, I could make magic do anything.  So long as I was willing to pay the price . . .'

Allie Beckstrom knows better than most that there's a price to pay for using magic; she's suffered her fair share of migraines and gaps in her memory during her time working as a Hound, tracing spells back to their casters.  But now Allie's been visibly marked by magic with a mysterious iridescent tattoo.  She's not only lost all memory of how she got it, but also of the man that she's supposedly fallen in love with.  Oh, and as usual, she's completely broke.

So when the criminal magic enforcement division of the police ask her to consult on a missing persons cases, things start to look up.  At first, it seems to b a fairly straightforward way of earning some money, but like most things in Allie's life it soon turns into a dangerous mix of underworld criminals, ghosts and blood magic.

Review:
Magic in the Blood picks up Allie's story not long after the ending of Magic to the Bone.  After events at the end of the first book forced her to use a great deal of magic Allie is still recovering both physically and mentally from the after effects.  She has very few memories from the past few weeks and is trying to piece together everything from the death of her father to her strange new magical abilities, not to mention her possible relationship with Zayvion.  It's not long before she has more important things to worry about though, the Magical Enforcement Response Corps (MERC) need her help Hounding a case and she is being followed by gang members working for the criminal magic user Lon Trager.  Trager was put behind bars thanks to Allie's testimony but has been released early due to a technicality.  It's no surprise to Allie that he wants revenge but he isn't the only one and Allie isn't quite sure who is going to attack first.

Although I enjoyed the first book in the series I liked Magic in the Blood even more, we are getting to know Allie a bit better now and she's becoming quite a strong character.  She isn't some kind of superhero who never gets hurt - she ends up in pain every time she uses her magic - but she is tough enough to put the pain to one side and carry on with the task at hand.  You have to admire her determination to get things done.  The memory loss she suffers as another side effect of using magic is an interesting idea and allows for some unusual plot devices because we know so much more than she does.  I do hope she retains at least some memory of the events in this book though or it could start to get a bit tedious.  It isn't surprising that she has trust issues because for most of the book she doesn't seem to get a straight answer from anyone, people always seem to give her part answers or avoid her questions altogether so the poor girl never really has a chance to find out what is really going on.

I mentioned in my review of Magic to the Bone that I was curious about Zayvion but hadn't really fallen for him and I felt that his relationship with Allie was rather rushed.  I was glad to see them take a step back in this installment and I've found that Zay is starting to grow on me, there are a few really sweet moments when he is trying to woo Allie and I'm looking forward to seeing more of that in future books.  There were more than  few occasions when I was just about ready to strangle him though - that man is a master at avoiding giving a straight answer and I think if I was Allie I would have completely given up on him.  I'm all for a man of mystery but at least give her something to go on!

I enjoyed meeting more of the Hounds and finding out about the kind of jobs they do and how they deal with the effects of the magic that they use.  It will be interesting to see how things progress with the Pack as the series continues and I think there is a lot of potential for interesting story lines involving MERC too.  The plot is a little slow moving in the first half but I'm interested enough in the world Devon Monk has created that it didn't really bother me and the pace really picks up towards the end of the book.  I'm looking forward to seeing Allie deal with her new magical abilities, I want to see more of Zay (although he'd better start giving away a bit more information about himself!) and I'm curious to find out more about the mysterious group who have been following Allie.  This series has a lot of potential and is one I would recommend to urban fantasy fans.

Source: Received from Berkley UK in exchange for an honest review