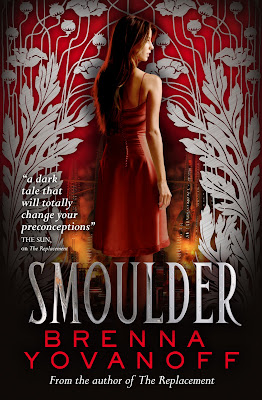 Daphne is the half-demon, half-fallen angel daughter of Lucifer and Lilith.  Life for her is an endless expanse of time - until her brother Obie is kidnapped, and Daphne realises she may be partly responsible.  Determined to find him, Daphne travels from her home in Pandemonium to the vast streets of Earth, where everything is colder and more terrifying.

With the help of the human boy she believes was the last person to see her brother alive, Daphne glimpses into his dreams, discovering clues to Obie's whereabouts.  As she delves deeper into her demonic powers, she must navigate the jealousies and alliances of the violent archangels who stand in her way.  But she also discovers, unexpectedly, what it means to love and be human in a world where human is the hardest thing to be . . .

Review:
As the daughter of Lucifer and Lilith Daphne has spent an eternity living in Pandemonium (Hell).  Although her sisters all spend time on Earth luring unsuspecting men into their traps Daphne has never been tempted to leave her home.  Until her brother Obie is kidnapped.  Determined to find her brother and ensure his safety Daphne goes in search of the last person who saw him before he disappeared.  Truman is a messed up human that Obie helped a long time ago but can he help Daphne find him?

Smoulder (released in the US with the title The Space Between) is a dark urban fantasy story that has some fantastically creepy moments in it.  Even though I finished reading it days ago I'm still having trouble summing up my feelings for the book but I think the word that probably describes it best is bizarre.  Brenna Yovnoff has put her own unique twists on demon and angel mythology that most of us are already familiar with and she has created some really interesting characters.  I really liked the fact that nothing was black and white, some of the "evil" demons do good things and equally the angels don't always seem to have everyone's best interests at heart.  The world is full of shades of grey so I appreciate it when authors include that in their fictional characters too.  I found it quite ironic that demon Daphne always told the truth but you had to take anything Trueman had to say with a pinch of salt because he often lied.

I did find it a little confusing switching from Daphne's first person account of events to the third person point of view that focused on Trueman's side of the tale.  I can see why the author did that because Trueman is a seriously messed up character and I don't think anyone would want to spend time inside his head but the switch between styles confused me every time. Every time I started a new chapter I had to read the first few paragraphs several times to get used to the change.  Daphne's voice definitely captured her "otherness" and showed that she wasn't a normal human girl which I think takes skill and wouldn't have worked if her side of the story had been told in third person.

I think my favourite character had to be Raymie but she was also the character that freaked me out the most.  On one hand I wanted to pick her up and give her a hug but on the other I wanted to run away screaming!  You'll have to read the story to find out why but trust me she is one seriously creepy girl!  I really would have liked to have seen more of Lucifer, Lilith and Beelzebub because I thought they could have been fascinating characters if they were fleshed out more.  The thing that disappointed me the most was the ending, I can't say much without giving spoilers so I'll just tell you that I thought Daphne's actions were extremely selfish and I didn't really see how it could have worked like it did.  I think you'll see what I mean if you read the story for yourself.

Although I wasn't keen on the ending I did still enjoy the story and think it will go down well with anyone looking for a darker read.  Unusually for an urban fantasy story it touches on real issues like grief and how it can lead you on a very destructive path into alcoholism and self harm.  I have Brenna's debut novel The Replacement sitting on my to read pile so I can't compare the two stories but I'm definitely looking forward to picking that one up soon.