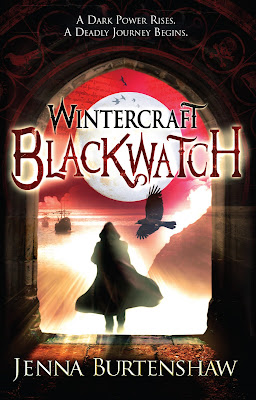 Albion's Skilled community have long feared the dark practises detailed in the book of Wintercraft.  Only one girl is powerful enough to manipulate its secrets and now the book is in her possession.

Kate Winters is on trial, falsely accused of murdering the Skilled's leader.  Shunned by her own kind, Kate can see no escape and worse, a sinister threat is arraying outside the underground caverns where she's being kept: the Continent's elite assassins known only as Blackwatch.

Silas Dane is also hunted by Blackwatch.  In the war against Albion, the Continent is keen to explore Kate's power and they know that Kate and Silas are inextricably linked . . .

Time is running out.  Can Kate and Silas halt the dark forces at work or will the web of deceit surrounding Wintercraft ensnare them?

Review:
I loved Wintercraft so was looking forward to re-visiting the world Jenna Burtenshaw has created in Blackwatch.  This really is a fabulous dark fantasy series and one that I would highly recommend.  This story is told from both Kate and Silas's points of view which allows us to follow two very different journeys as they face the aftermath of events in the first book.  Kate and her friend Edgar went to the Skilled for help and protection but Kate finds herself wrongly accused of murder and placed under arrest.  When she is found guilty and imprisoned Edgar is horrified and determined to find a way to release her.  Silas is on the run knowing that the whole of the High Council believe him to be a traitor.  He flees Albion and heads to the continent in search of Dalliah who he believes could be a strong ally.  However nothing is quite what it seems and there are events in motion that neither Kate or Silas are aware of, someone is manipulating them both but who is it and just what are they trying to achieve?

Silas was my favourite character in the first book and that has continued into Blackwatch, in fact I think he's one of my favourite characters of 2011.  He is so complex and you're never quite sure what to make of him, he definitely has a bad side - we saw in Wintercraft how lethal he is to his enemies but he also has a kinder side even if he does keep it well hidden.  I never know quite what to expect next when it comes to Silas and I love it when a character can surprise me as much as he does.  I really like Kate too but I would have liked to have seen a bit more of her using her new found abilities in this book.  We hear a lot about how Kate is the most powerful Walker in memory and the Skilled are all afraid of her potential but we don't get to see much of what she is capable of, I'm sure this is something that will change in the next book though.  I have a bit of a soft spot for her friend Edgar too, he is so caring and goes out of his way to protect Kate no matter what risk it puts him under.

The plot is so fast paced that I didn't want to put the book down, there are some great twists that I didn't see coming and it makes it really difficult to figure out who Kate can really trust.  The ending has left me desperate to get hold of the next book in the series and I can't wait to see what happens next.  Another great installment from Jenna Burtenshaw in a series I'd highly recommend.