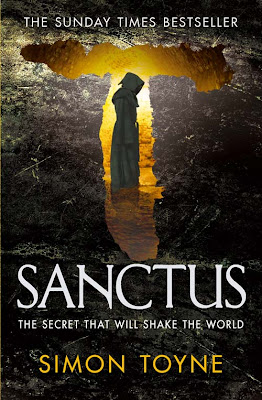 A man throws himself to his death from the oldest inhabited place on the face of the earth, a mountainous citadel in the historic Turkish city of Ruin. This is no ordinary suicide but a symbolic act. And thanks to the media, it is witnessed by the entire world.

But few understand it. For charity worker Kathryn Mann and a handful of others in the know, it is what they have been waiting for. The cowled and secretive fanatics that live in the Citadel suspect it could mean the end of everything they have built – and they will kill, torture and break every law to stop that. For Liv Adamsen, New York crime reporter, it begins the next stage of a journey into the heart of her own identity.

Poppy's Review:
Sanctus is a story about an ancient order of monks and a secret that they are prepared to keep at any cost. I was totally hooked by intrigue within the first couple of pages and read the book at every opportunity until I reached the final word. The story opens at the Citadel in the Turkish City of Ruin where the monks live and following a curious death, the race is on for the monks to ensure that their secret is protected, while others outside the Citadel see it as the time to finally uncover it. Liv Adamsen is a reporter who lives many miles away in New York and her day to day life changes forever, as she embarks on a journey into the biggest story sending ripples around the world.

I really enjoyed the way the story unfolded through the first three quarters of the book. Segments of information are shared with the reader bit by bit, and they slowly start to knit together and a picture starts to form from the past and you can see how they led to current events. Having grasped what is going on and getting to know the characters and how and why they are involved in the story, the final quarter of the book increases to a fast pace and the short chapters finally bring you to [what I found to be] a satisfying end. I found that I had to read this final quarter of the book in one sitting as it was so compelling.

What I loved was not just the story itself and how it unfolded, but also the characters. As each character was revealed and became involved in events, I got the measure of each of them and although they were not created in great depth, I still cared about some and despised others, which made the concluding chapters of the book all the more breath taking and page turning.

For me Sanctus is a brilliant mystery thriller debut novel by Simon Toyne, which I enjoyed even more than The DaVinci Code.