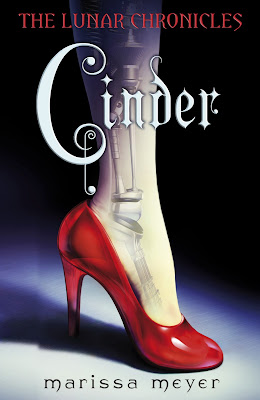 A forbidden romance. A deadly plague. Earth's fate hinges on one girl . . .

Cinder, a gifted mechanic in New Beijing, is also a cyborg. She's reviled by her stepmother and blamed for her stepsister's sudden illness. But when her life becomes entwined with the handsome Prince Kai's, she finds herself at the centre of a violent struggle between the desires of an evil queen - and a dangerous temptation.

Cinder is caught between duty and freedom, loyalty and betrayal. Now she must uncover secrets about her mysterious past in order to protect Earth's future.

Review:
Cinder is an orphan who was adopted by Garan when he was travelling in Europe and he brought her home to live with his family in New Beijing. Her stepmother Adri never wanted a new addition to the family and since Garan's death shortly after he returned with Cinder she has made her stepdaughter's life a misery. Cinder is a gifted mechanic - thanks to her cyborg abilities - and she is forced to work at the market to earn the money that the family need to survive.

I love fairytale retellings so as soon as I heard that Cinder gives Cinderella a futuristic sci-fi twist I knew I wanted to read it. I was caught up in the story from the moment I picked it up, Marissa Meyer has created a detailed and interesting world and one that I would have been happy to spend much more time exploring (yay for the fact there are going to be 3 more books in the series, although it's going to be a long wait to get my hands on them!). Set sometime after the fourth world war Cinder lives in a world of cyborgs, androids and hover cars. There is a worldwide deadly plague that is causing terror amongst the population, one with no survivors and that the scientists seem no closer to curing. I did find myself thrown out of the story a couple of times by the use of unfamiliar terminology but that was something I got used to and it didn't stop my enjoyment of the book.

What I loved most was Cinder's character, she is much stronger and less of a push over than poor Cinderella ever was. She may be treated terribly by her stepmother and her stepsister Pearl but she has a plan and she is determined to escape from their clutches. She is prepared to work hard, she doesn't sit around feeling sorry for herself and although she is a social outcast she still has confidence in her own abilities. I loved her relationship with her younger stepsister Peony who also happens to be her only human friend. Peony was the only member of Cinder's family that I didn't find myself wanting to slap or push off the top of a very tall building. She was a sweetheart and it was so nice that she didn't conform to everyone elses prejudices against cyborgs. I also loved Iko, their friendly household android with a faulty personality chip. Cinder, Peony and Iko together never failed to make me laugh with their crazy conversations. I liked Kai and I enjoyed the slowly developing romance with him and Cinder. I loved how flirtatious they were with each other and I really enjoyed the few chapters that we had from Kai's perspective. It would have been nice to have seen more from his point of view though because we didn't get to know him as well as I wanted to.

I haven't even mentioned the evil Queen Levana who is the ruler of the Lunars (the population on the moon). She was a ghastly character with some scary abilities and she has her sights set on taking over earth too! The plot is complex, there really are a lot of different things going on and I felt the pacing was great. I was never bored while reading, I enjoyed the world building (even though I am left with questions) and although I'd guessed one of the main twists there were still plenty of things that surprised me. I was a bit disappointed that we are left with such a huge cliffhanger ending though. I don't mind a bit of a tease for the next book but considering we have a year to wait for the next installment I really would have liked a few more things to have been resolved. Cinder is a strong debut and one that I would highly recommend to anyone who likes fairytale retellings and futuristic science fiction. I will be first in the queue to get a copy of the second book Scarlet (which is a retelling of Little Red Riding Hood) when it comes out next year!

Source: Received from Puffin in exchange for an honest review