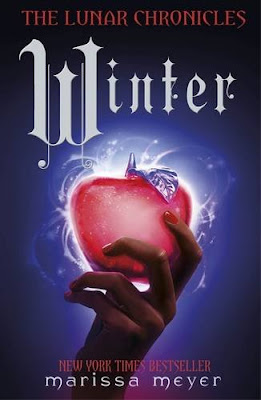 This is not the fairy tale you remember.
But it's one you won't forget.

Winter is admired for her grace, kindness and beauty, despite the scars on her face. She's said to be even more breath taking than her stepmother, Queen Levana . . .

When Winter develops feelings for the handsome palace guard, Jacin, she fears the evil Queen will crush their romance before it has a chance to begin.

But there are stirrings against the Queen across the land. Together with the cyborg mechanic, Cinder, and her allies, Winter might even find the power to launch a revolution and win a war that's been raging for far too long.

Can Cinder, Scarlet, Cress and Winter claim their happily-ever-afters by defeating Levana once and for all?

Review:
Winter, the long awaited finale to the Lunar Chronicles, was probably one of my most anticipated reads of 2015 so it's no surprise that I dropped everything to dive straight in when my copy arrived. Not many authors can pull off a book that's over 800 pages long but still has me gripped from beginning to end but Marissa Mayer achieved it and Winter was truly EPIC. I did have an issue with one thing towards the end of the book but apart from that I loved every minute of this book and it took me on an emotional roller coaster ride that I won't be forgetting any time soon.

I want to talk about how much I love all the characters in this series (well, apart from Levana who is one of the most despicable character's I've ever read about LOL). I love how unique each of the couples have been and how they've all had their own important roles to play in the series. Cinder has been a brilliant character from the beginning, I love how smart she is and the way she always looks out for the people around her. She never wanted to be the missing Lunar princess but she knows she's the only one who can rightfully take the throne from Levana so she's taken on the responsibility to save her people even when the thought of becoming a queen terrifies her. Kai is a great match for her, he understands responsibility probably even more than she does, everything he does is to protect the his people even when it means making horrific sacrifices like agreeing to marry Levana. Their relationship has been quite a slow burner but it's so sweet to watch and I loved it.

Scarlet and Wolf have been through hell and back already but their troubles are only just beginning. At the start of Winter Scarlet is being held captive on Lunar and Wolf is at a complete loss without her. My heart broke for everything these two have to endure and I think they're probably my favourite couple because of the way they're both so determined to find a way back to each other. Nothing is going to stop them and they have some of the sweetest moments in the book alongside some of the most upsetting. Thorne always makes me laugh, no matter what situation the group find themselves in he always manages to lighten the mood and add a little humour. There is a lot more to him than meets the eye though and I enjoyed getting the chance to dig deeper into his character in this book. Cress is the sweetest and most innocent of the group, she has led such a sheltered life and has never really been in physical danger in this way before but she steps up to the plate wonderfully and I was so proud of how brave she has become here.

Winter and Jacin may be the newest couple in the series but I think they're possibly the cutest. Winter comes across as completely crazy most of the time and she's definitely damaged thanks to the Lunar sickness she has from refusing to use her abilities but underneath the madness she can be surprisingly intelligent and she has some really interesting insights into other characters and the situation they're all in. Jacin has loved Winter forever but he knows they'll never have a future, after all she's a princess and he's merely a guard. He will do anything to protect her though and as much as some of his actions are questionable and made me angry his heart is in the right place and he has a reason for everything he does. Never once does he care about his own life, it's all about what needs to be done to protect Winter and I admired him for the way he looked out for her. I also loved seeing the two of them together and even now I've reached the end of the series I'm having trouble picking out a favourite couple to ship. I can't forget to mention Iko, the sweetest little boy crazy android you could ever hope to meet, she is just so adorable and adds a huge amount of fun to the series.

What I love about Marissa Meyer, aside from her ability to create fantastic characters and a wonderfully imaginative world, is the way she manages to take such well known fairytales and completely twist them on their heads. She includes enough elements to make them recognisable but at the same time manages to create something unique and completely her own. This series has been full of incredibly highs and horrifying lows and Winter nearly turned me into an emotional wreck but the journey was so, so worth it. I did mention that there was something towards the end that irritated me but I can't go into too much depth without giving spoilers so I'll just say that I didn't like the way they used Levana's disfigurement against her, they had plenty of other ammunition to use considering all the horrific things Levana has done and that just made me feel really uncomfortable. In any other book I'd have probably marked the story down for that but I was so completely invested in this series and so gripped for the entire book that I can't bring myself to give it less than five stars. It truly has been a memorable journey and although I'm sad it's over I'm very happy with the way everything came together.

Marissa Meyer was already an auto-buy author for me but finding out that her next book, Heartless, is going to be based on Alice in Wonderland has just made me even more eager to get my hands on a copy!