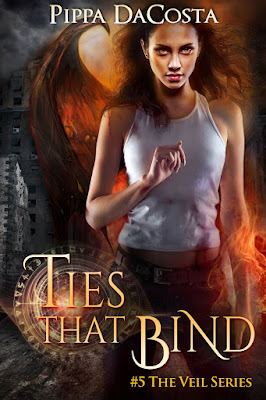 “I am fire. I am destruction. I will be their nightmare.”

The veil fell. Demons are here. Muse knows she can stop the slaughter, but to do so, she must return to the battle-scarred streets of Boston and face the cold, hard, truth. Her old life is ashes. Her love, turned to dust. But all is not lost; a spark of hope remains. A spark from which an inferno can blaze.

To stop the demons claiming Earth as their own, Muse must unite those capable of repairing the veil. The Dark Court, led by her Prince of Lust father, seek to recruit her to their cause. They want the veil destroyed for good; for chaos to reign for eternity. She will need to manoeuvre around their deadly intentions, and enlist the King of Hell’s help, before it’s too late.

For Muse to succeed, she must survive her father, save her soul, resurrect her love, forgive her enemies, and betray a trust. She must be everything she can be—demon and human. She must be their nightmare.

In this, the fifth and final Veil Series book, we return to where it all began. To the netherworld, where once a wretched half-blood girl surprised the Prince of Greed. To a world where ‘hope’ is fantasy, and ‘love’ a disease.

Muse is ready to take the fight to the demons. Are you?

Review:
You know that feeling when you love a book so much you can't get your thoughts organised enough to write a proper review? Well, that's the problem I'm having with Ties That Bind so you're just going to have to forgive me. I fell in love with Pippa DaCosta's Veil series when I read the prequel novella and that love has only grown with each and every instalment. The series really does have it all: fantastic complex and three dimensional characters, jaw dropping action and a plot that is full of more twists than a bowl full of noodles. You honestly never know what you're going to get and I love that about it.

Ties That Bind is completely packed with action, so much so that I devoured it in one sitting. Muse will be forced to betray someone she loves while she protects one of her enemies, she'll have to face off against her father and the remaining princes, she'll meet an exciting new character (please oh please someone tell me that Li'el is going to be the star of the spin off series because I'm already half in love with him!) but never be quite sure which side he is on and she'll finally have to pick where her future lies - with demon Akil or half-demon Stefan.

This series doesn't shy away from the dark, in fact it welcomes it in with open arms. Muse has been through so much and it's changed the way she sees things but she has never lost hope that the world can be saved. She may think she doesn't deserve her own happily ever after but she is determined to put a stop to the princes and to close the veil so humanity can be saved. She's the kind of character you root for from the beginning, she's strong, smart and completely badass and I love her for it. I've also enjoyed seeing the pull the two men in her life have on her, don't panic and think this is another of those series with a terrible love triangle because it really isn't but both Stefan and Akil have a piece of her heart and it hurts to see her have to choose between them.

I don't really know what else to say about this book other than to say how gutted I am that the series has come to an end. I'm excited that there will be a spin off but I'm going to miss Muse and her crew so I'm hoping we'll at least see a few cameo appearances. Either way I'm looking forward to spending more time in this world, I'm sure there is a lot more story for Pippa DaCosta to tell and if it's half as good as this series then it's going to be awesome. If you haven't started this series yet then I honestly don't know what the hell you're waiting for - it's one of the best new urban fantasy series I've discovered in a long time & I think everyone should read it!