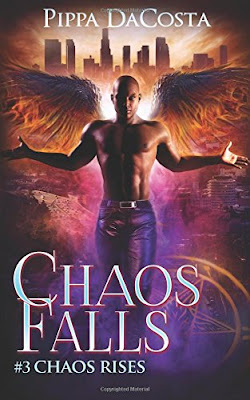 Restaurant owner, Hollywood socialite, Prince of Pride: Li'el is one of few demons left this side of the veil, and he has every intention of reveling in his new-found freedom.

But being the last demon in LA means that when mauled and shredded bodies are found within a few blocks of Li'el's popular Decadent-i restaurant, the list of suspects is a short one.

Add to that the suspicious death of a well-known reporter during one of Li'el's infamous after-parties, and he soon finds himself wanted for all the wrong reasons.

With the Dark Court gone and his powers waning, his reign at the top of the demon food chain could be over.

The Prince of Pride is about to discover there are worse creatures than demons in LA...

The demons are back in Chaos Falls, the third and final installment in the Chaos Rises series.

Review:
It's no secret that I'm a huge Pippa DaCosta fangirl, I've loved every book she's ever written but the Veil books have a special place in my heart because it's the first of her series that I ever read & it's what got me hooked on her writing to start with. The Chaos Rises spin off series has been just as fantastic, if not better, than the original one and when Pippa announced that the book would be told from Li'el (Prince of Pride)'s point of view I was over the moon. His character has fascinated me from the first time we met him and throw in a guest appearance from Akil and you pretty much have the demon dream team right there.

I really don't want to say too much about this story but I will tell you that it was even better than I could ever have imagined. Li'el is such an incredibly complex character, he's lived for thousands of years, most of them on the other side of the Veil in the demon realm, but his time amongst humans has changed him. He definitely isn't a reformed man but he isn't pure evil anymore either, it takes time to dig deep into his motives and figure out what he really wants and I think half of the time he's not too sure of the answer to that question himself. Life should be much easier for him now that the tear in the Veil is closed but typically humans just don't know when to leave well alone and it shouldn't surprise anyone to hear they find a way to make an even bigger mess of things. Li'el is facing an impossible enemy and the only people he has to work with are just as likely to turn on him as they are to have his back.

Chaos Falls is full of twists, totally action packed and an emotional rollercoaster that will leave you breathless and smiling at the end. I loved getting the chance to see some familiar faces from the previous books and meeting some new ones but it was Li'el who totally stole the limelight, not that you could expect anything else from a Prince of Pride! This was a fitting end to a fantastic series, I'm sad it's over but it definitely went out with a bang and I'm looking forward to the next adventure Pippa is sure to take us on.