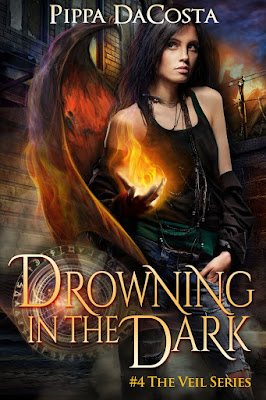 “I wasn’t demon enough to defeat my brother before. Things have changed.”

As the veil begins to fall, and the demons bleed through onto the streets of Boston, Muse knows the battle is lost before it’s even begun.

To make matters worse, Adam and the Institute have captured Akil at a time when the city has never needed him more. Muse believes Akil’s incarceration is a ruse, because if he truly is at the mercy of the Institute, she must choose which side she’ll fight for. Human or demon?

The princes are coming. Valenti, Muse’s immortal half-brother, leads the charge. The Institute is not ready, the people of Boston are not prepared, but one man is. Stefan knows what it will take to beat back the netherworld. Will his demon allow him the freedom to right his wrongs?

Muse’s loyalty will be tested. To save those she loves, she must give up that which she cherishes most. Her humanity.

The Mother of Destruction is about to go nuclear.

Review:
Just when Muse thinks things can't get worse the Veil between our world and the Netherwold starts to fail allowing more and more demons to get through. Muse knows that the Princes of Hell are on their way and she has no hope of surviving if she has to stand against them alone. Akil seems to be on her side but when he is taken captive by the Institute she isn't sure where to turn. Stefan is back but his demon side is more in control than his human one and Muse can never be quite sure whether he loves her or hates her and Ryder has already betrayed her more than once. With her brother Val determined to open the veil once and for all Muse is going to need every little bit of power she can get her hands on to keep the princes at bay and she needs to figure out who she can trust to help her - fast.

I think Pippa DaCosta is trying to kill me, she keeps throwing my favourite characters into these incredibly stressful situations and making them work against impossible odds. She isn't afraid to hurt them and I can never quite be sure if she's going to murder them or somehow get them through by the skin of their teeth. In fact, this series should probably come with ulcer warnings because my stomach is always in knots when I'm reading it! I honestly never know what is going to come next and that's one of the reasons I love these books so much. They're dark and they can be uncomfortable but the characters are fantastic, multifaceted creations who are never simply good or evil. There are so many shades of grey and sometimes the bad guys are the only ones you can trust because at least they'll warn you before they stab you in the back unlike the supposedly good guys who will string you along with lies until they find the perfect moment to betray you.

I absolutely love Muse, after everything she has been through I think it would be easy to forgive her if she just gave up but she keeps on fighting for what she believes in. She's sure there can be no happily ever after in her cards but she keeps hoping that things can be better for other half bloods, she wants to keep humanity safe from the demons and she is so determined to do the right thing no matter what any prophecy may say about her. I love the way she sees the good in people, even those who have hurt her the most, but there are times when I kind of wish she had a bit more of a nasty streak because there are some characters who really deserve to get their arses handed to them. I only have one book left in the series now and I'm kind of terrified to pick up Ties That Bind, I honestly have no clue how Pippa DaCosta is going to tie everything up but I have absolutely no doubt that if Muse is going to get a happy ending she's probably going to have to face a lot more trouble before she earns it. I just really, really hope things turn out well for her. No matter what happens in the final book this series is absolutely fantastic and I can't recommend it highly enough.