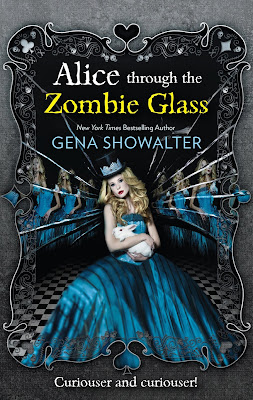 Alice Bell has lost so much.

She thought she had nothing else to give. She was wrong.

After a new zombie attack, strange things begin to happen to her. Mirrors come to life, and the whispers of the dead assault her ears. But the worst? A terrible darkness blooms inside her, urging her to do very wicked things. She’s never needed her team of zombie slayers more, but ultra bad-boy Cole Holland, the leader and her boyfriend, suddenly withdraws from her… from everyone. Now, with her best friend Kat at her side, Ali must kill the zombies, uncover Cole’s secret and learn to fight the darkness.

But the clock is ticking… and if she fails at a single task, they’re all doomed.

The White Rabbit Chronicles:
Alice in Zombieland
Alice Through the Zombie Glass
The Queen of Zombie Hearts
A Mad Zombie Party

Review:
Sometimes it can be a nerve racking experience to pick up the second book in a series, I'm sure we've all been in the situation where the sequel to a much loved first book ends up being a terrible disappointment and leaves us wondering whether it's even worth continuing with the rest of the series. Well I know I have anyway so I was slightly worried when it came to Alice Through the Looking Glass, what if it didn't live up to my expectations? Thankfully my fears were unfounded and within a couple of pages I was completely hooked. This story had everything I loved about the first book and then some and I loved every minute of it.

I don't want to talk too much about the plot but Alice Through the Looking Glass was darker and grittier than the first book, Ali is facing a far more dangerous enemy than she has before and it's one that she doesn't have much hope of defeating. The life that she has worked so hard to rebuild is starting to fall down around her ears and it's going to take every bit of courage and determination she has if she wants to hold things together. I love how strong Ali is, she has been through so much but she never gives up hope and she never stops trying to make things better for her friends and the people she cares about. I also love the great friendship between her, Kat and Reeve. The three girls are always there for each other and it's a refreshing change to have strong female friendships in a YA novel. It's actually quite sad that I feel the need to mention that fact but I'm so sick of reading stories where females treat each other as enemies even when they're supposed to be "best friends". I even found myself liking Mackenzie and Trina in this story and that's definitely not something I saw coming.

I have been a huge fan of Cole since the beginning but I have to admit I was more than a little irritated by his attitude for the majority of this book. The visions he has always shared with Ali have dried up and now she's experiencing something similar with Gavin, a new hunter on the scene. Cole is jealous and upset which was understandable but he uses the visions as an excuse to treat Ali really badly and I was incredibly angry with him because of that. I liked the way Ali called him out on his behaviour and I'm glad he eventually apologised and started to try and make up for his bad behaviour but I think I would have liked to see Ali make him suffer a little more before she forgave him. To be honest, as much as I still like him I'm now a little wary of him and I really hope he proves himself in the next book. They do have such great chemistry that it would be a shame for their relationship to be ruined. I was worried at one point that Gena Showalter had introduced a love triangle to the story but I'm pretty pleased with the way things turned out in the end and I'm glad it wasn't dragged out for several books.

Although the romance may have been a little lacking in this instalment the plot was on top form and there was plenty of action to keep me turning the pages. There is also some fantastic character development and I loved catching up with the hunters and seeing how they're all getting on now. There were some lovely scenes between Ali and her grandmother and some very sweet moments with her little sister too. We also get to meet some great new characters and it looks like things are about to get really interesting in the next book. I'm definitely excited to continue reading the series and I'm glad I already have the next two books so I don't have to wait to find out what happens next.