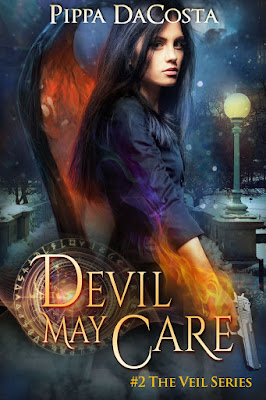 “He should be dead. I thought I’d killed him. I was wrong.”

Three dead enforcers in three weeks, their bodies butchered. Muse has seen it before, and when she reads the metal memories in the murder weapon, she sees it all again. Her owner, Damien, is back, and he wants what is rightfully his.

Muse escaped him and the netherworld, once before. This time, she’s stronger, smarter. This time she knows she has the fires of hell at her fingertips, but so does Damien, and he’s not the only one. Akil is weak. No longer a Prince of Hell, he needs Muse’s limitless power to regain his title. How fortuitous then, that Akil’s fate is tied to the one man she cares the most for.

As Muse, Stefan, and Akil battle their own demons, not all will come away victorious. Some choices can never be forgiven. Some lies are never forgotten. Some wounds will never heal.

Review:
Devil May Care picks up Muse's story about six months after the end of Beyond the Veil. Stefan and Akil are still trapped in the netherworld and although Muse is determined to get Stefan out she knows she can't do anything without her demon side so she is trying to win the trust of the Institute so that they'll give her the antidote to the drug that has locked her demon deep inside her. As if that wasn't bad enough when she is asked to investigate a spate of murders she realises that her demon owner Damien is actually still alive and he's very determined to recapture her as his slave. Without her demon side Muse is defenceless against him so she's going to have to take desperate measures if she wants to survive and keep her freedom.

After loving the first book I couldn't wait to see how things would play out in this one and I was completely hooked from the beginning. Devil May Care is a darker story than Beyond the Veil, Muse is really up against it and Damien is a particularly terrifying enemy to face. Muse is at a distinct disadvantage because she is paralysed by terror when he even looks at her and it takes her a great deal of courage to try and fight back after everything he has done to her. Some scenes with Damien made me feel quite uncomfortable but that just shows how good the writing is, Pippa DaCosta has me so invested in Muse's story that I feel everything that she goes through right alongside her and I desperately wanted to see her find a way out of the horrible situation she finds herself in.

I'm going to admit that I missed the connection between her and Stefan and even the interactions between her and Akil at the beginning of the book. There wasn't as much romance or humour in this instalment and both characters were missing for most of the beginning of the story. When Akil does make a reappearance he is just as untrustworthy as ever, I still have no idea what to make of him but his character is definitely an interesting one. One minute he'll do something that makes me think he genuinely cares about Muse but the next he'll be back to his usual self-serving ways and I definitely don't trust him to have her best interests at heart. Stefan has been changed by his ordeal in the netherworld, what may have only been six months to Muse has felt like years to him and even though his demon half has protected him life definitely hasn't been easy. I missed the easy banter between Stefan and Muse, I loved the connection that had built between them in the first book and that's all fallen apart here thanks to the circumstances they find themselves in. I really hope they'll get things back on track eventually but I think it's going to take a lot of work on both sides before we see their relationship improve.

There is a lot going on in this book and it definitely had me on the edge of my seat waiting to see what would happen next. We meet some great new characters and get to know some familiar faces a little better. The actions of some characters definitely surprised me and it's going to be interesting to see the fallout for certain events in the next book. I'm thoroughly enjoying this series so I'm going to end this review here so I can continue my reading binge!