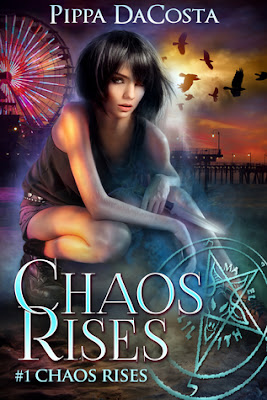 'When the veil fell, any half-bloods not strong enough to withstand Chaos were torn apart. Some, like me and my brother, survived The Fall. Most did not.

That's the good news. The bad news saw a whole other world try and devour ours. Demons, we call them. They came in countless waves. Destroying. Killing. Many people thought it was the end...

The Fall lasted a week.

Hell almost claimed our world as its own.

And then, from one day to the next, it was over. The veil came back, stronger than ever. I'm not sure if anyone knows how it was put right. But I do know it's been six months since The Fall, me and my brother are on the run, and the leftover demons aren't the most dangerous things in LA.

This heart-pounding new urban fantasy series promises to bring action, suspense, and a hint of romance to the demon-torn streets of Los Angeles.

Review:
I absolutely love Pippa DaCosta's Veil series so of course I was desperate to get my hands on the spin off and have the chance to revisit the world again. You know what? Even though I had incredibly high expectations for Chaos Rises I think it managed to surpass them and I'm pretty sure I'm going to end up loving the new characters even more than the original ones! And let me just tell you that is saying something because Muse, Stefan and Akil are right up there with my favourite characters EVER.

Anyway, we have a new cast for Chaos Rises, I did wonder if our previous favourites would make an appearance but I'm actually kind of glad that they didn't. I wouldn't mind catching a glimpse of them in the future but this book is all about Gem, her brother Delta, Torrent (another half-blood of questionable loyalty) and Gem's demon boss (aka the pain in the butt that she can't quite get away from) Allard. It's hard to know how much to say about the plot of this book because I really don't want to give anything away so I think I'm going to keep this deliberately vague and focus more on the new characters.

Let's start with Gem (short for Gamma), she is one kickass half-demon who is fiercely protective of her brother. The two of them have been to hell (literally) and back but their worst enemy by far is the very human Institute who made life so difficult for Muse in the previous series. You may even remember Gem and Del being mentioned briefly in the earlier books as the half-bloods that Akil rescued from the Institute just before things went completely crazy when the Veil fell. Gem and Del have very little experience of the human world since the Institute kept them so isolated so they were easy prey for Allard and he now keeps them on a tight reign. Gem definitely isn't a pushover though and she fights back at every possible opportunity. We don't get to know Del as well in this book but I'm very intrigued about him and definitely want to know more about his powers.

Torrent is another brilliant character, it's hard to tell whether he's completely trustworthy (Pippa DaCosta is excellent at writing morally ambiguous characters!) but I'm already half in love with him. I thoroughly enjoyed the interaction between him and Gem and the way he constantly puts her on edge. She's never had anyone but Del show her even a small amount of kindness before so she's not quite sure how to react when Torrent helps her and she's definitely not sure if he can be trusted in the long run. Allard is the kind of character I love to hate, he's everything you'd expect from a powerful demon in this world and he uses every trick in the book to get the things he wants.

I'm not going to say anything more because I want readers to go in with no idea what to expect, I want you to experience the book the way I did so that you can appreciate the edge of your seat action, the brilliant characters and the fantastic world building for yourselves. I guess people who are new to Pippa DaCosta's writing (Who are you crazy people? You need to fix that issue IMMEDIATELY!) are probably wondering if they can pick up Chaos Rises without reading the Veil series. I guess my answer to that would technically be yes, this series is all about new characters that we know practically nothing about beforehand and it's the start of a definite new story arc, but the world building does continue closely from the previous story. Although you can start here personally I think you'd be crazy to skip the Veil books, purely because they are so fantastic! It is one of my favourite urban fantasy series and considering that I've read a lot of UF that's very high praise.

It's no secret that I'm a fan girl when it comes to this author, I've loved everything that she's written and Chaos Rises is no exception so I can't wait to see where she takes these characters next. It's going to feel like a very long wait for the next book but I'll be first in the queue to read it when it's published!

Source: Received from the author in exchange for an honest review (but I also purchased a copy since I love it so much and wanted to support the author)