I'm thrilled to welcome Paul Krueger to the blog today to celebrate the release of his debut novel Last Call at the Nightshade Lounge. I have a fab guest post from Paul to share with you about some of his favourite strong female characters and how they helped inspire the main character in his book Bailey Chen but first let me give you a little more information about the book.

Last Call at the Nightshade Lounge is a really fun new adult urban fantasy that I'm hoping is the introduction to a new series. What I love most was the unique idea of demon fighting bartenders who are able to mix special cocktails that give them superpowers! The book even includes a few recipes so if you're a cocktail fan you'll be able to make some of your own to drink while you're reading. 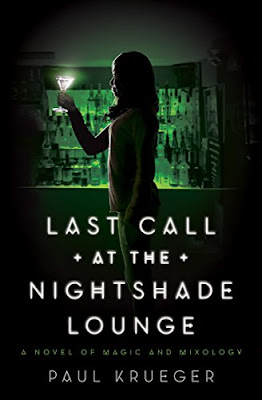 Bailey Chen is fresh out of college with all the usual new-adult demons: no cash, no job offers, and an awkward relationship with Zane, the old friend she kinda-sorta hooked up with during high school.

But when Zane introduces Bailey to his monster-fighting bartender friends, her demons become a lot more literal. It turns out evil creatures stalk the city streets after hours, and they can only be hunted with the help of magically-mixed cocktails: vodka grants super-strength, whiskey offers the power of telekinesis, and tequila lets its drinker fire blasts of elemental energy. But will all of these powers be enough for Bailey to halt a mysterious rash of gruesome deaths? And what will she do when the safety of a “real world” job beckons?

This sharp and funny urban fantasy is perfect for fans of Buffy the Vampire Slayer, Scott Pilgrim Vs. The World, and grown-up readers of Harry Potter. Includes 14 recipes from a book of ancient cocktail lore.

I'll be posting my full review later today but this was a really fun read and I really hope we're going to get more books about Bailey and her friends.

Now please give a very warm welcome to Paul Krueger!

If the term “Strong Female Character” makes your face cringe until it looks like a black hole collapsing in on itself, you’re not alone. There’ve been a great many thoughtful critiques of the archetype, though in my opinion the first and last word on the subject is Kate Beaton: http://www.harkavagrant.com/index.php/index.php?id=311.

The backlash against “Strong Female Character” has come from readers and critics examining the difference between what the term was coined to mean and what it’s become. What was supposed to be an expression for improved female agency in fiction has instead become derisive shorthand for the theme park version of that agency, often at the hands of male authors.

In a related story: hi. Paul Krueger, male author. Nice to meet you.

It’s difficult for a man to tackle this subject without sounding like Matt McGorry. So rather than repeat critiques that have been said elsewhere and more eloquently, I’d like to instead highlight some of my favorite examples of female agency done right, all of which I tried my best to emulate when I created Bailey Chen, the heroine of my debut novel, Last Call at the Nightshade Lounge.

1) Nico Minoru, Runaways
Nico was one of the original members of Marvel’s Runaways, a comic series I found young and fell for hard. In it, six teens find out their parents are supervillains, then run away from home and set about trying to bring their parents down. I was particularly drawn to Nico right off the bat, because she’s my kind of messy: a leader who’s always mindful of her responsibilities to others, but still prone to making bad, selfish decisions in the moment. Minus the gothy, witchy bits of her character, she’s probably Bailey’s most direct forebear.

2) Rachel, Animorphs
Rachel spends most of the Animorphs series bearing (and living up to) the nickname “Xena, Warrior Princess,” because that’s what happens in book series that began in 1996. She’s a gymnast and a fashionista who, upon her recruitment into an interstellar war, discovers a flair for combat and an accompanying bloodlust. Like so many before her, Rachel does desire to be a normal girl. But unlike the rest of them, that desire stems from how disturbed she is by her enjoyment of killing, and her fear that there will be no place for her in a post-war world. The Animorphs had a rotation of six very interesting narrators, but Rachel’s internal struggles always made her my favorite.

3) Mako Mori, Pacific Rim
Though she joins a long line of Asian heroines with dye-streaked hair (https://twitter.com/heyjenbartel/status/700373253148315648), Mako is a special kind of cool. She approaches her job with competence and cockiness, and underneath her reserved exterior is a headstrong streak that Avatar Korra would envy. I find her to be a particularly satisfying subversion of the tropes Asian characters are often saddled with, and that was something I consciously tried to borrow from her when I was writing Bailey.

As the publication of Last Call at the Nightshade Lounge approached, more than a few people asked me about the number of “strong female characters” in it. While I appreciate the compliment, the fact is that creating female characters with real narrative agency is very easy, and I don’t believe I deserve any great plaudits for bothering to include them in my work. Doing it was just something that mattered a lot to me, as was doing it right.

I hope I was successful.

Paul Krueger is the debut author of Last Call at the Nightshade Lounge, published by Quirk Books, and is available from all good books stores in paperback, priced $14.99 (US) and £11.99 (UK). For more information, please visit www.quirkbooks.com, or follow Paul on Twitter @notlikeFreddy or his website https://paulkrueger.net/
at 09:00