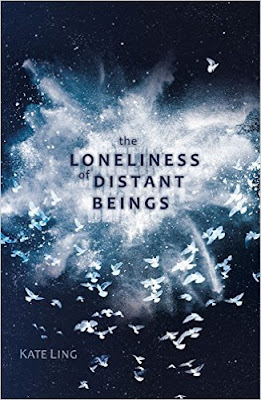 It is that quick, that strong, that beautiful. And it is also totally impossible.

Even though she knows it's impossible, Seren longs to have the sunshine on her skin. It's something she feels she needs to stay sane. But when you're hurtling through space at thousands of kilometres an hour, sometimes you have to accept there are things you cannot change.

Except that the arrival of Dom in her life changes everything in ways she can barely comprehend. He becomes the sun for her, and she can't help but stay in his orbit. To lose him would be like losing herself . . .

In the dark, can a heart still hope?

Review:
Seren was born on a spaceship and, along with her entire family, she knows it is where she will die. Her ancestors volunteered to take part in a deep space mission expected to last over 700 years in order to investigate a signal received by earth and hopefully make first contact with a new alien species. Life on the spaceship is strictly regimented, jobs are assigned according to skills and even your future partner is selected by a computer program designed to ensure genetic diversity. Children aren't conceived naturally which enables them to control the number of boys and girls that will be born to each generation and life partners are expected to do their duty and procreate as required. It's not a life that many people would choose to live but it's all Seren has ever known and the only option she has.

Everything starts to change when Seren falls in love with Dom, a young man who isn't her assigned life partner. The couple fight back against the system that wants to keep them apart but they have no idea how much danger they are facing. Their attempts to be together start a chain of events that nobody could have predicted and nothing will be the same for the couple ever again.

I have really mixed feelings about The Loneliness of Distant Beings, on one hand it makes some really interesting observations about free will and being able to choose your own destiny but on the other it has one of the worst cases of insta-love I've come across in a long time. I wasn't the biggest fan of the relationship between Seren and Dom, it happened so quickly that I never fully believed in it and because of that I was never fully invested in them as a couple no matter how much they went through to be together. Seren can be quite childish at times and she was also quite selfish and uncaring about the effect her actions would have on the people around her. While I could understand her fight for the right to make her own choices I didn't like the way she was so negative about people who had managed to make peace with their path in life and find happiness where they could. She was particularly mean about her sister when as far as I could tell her sister had never done anything to deserve it.

Although I wasn't completely invested in the relationship side of things I did find this an incredibly quick and quite addictive read. I whizzed through it in no time and I did really like the way the author tackled issues like the lack of free will the citizens on board were given. It was such an interesting concept that your ancestors could have signed up for a deep space mission and given up all sense of freedom for many generations to come. They are on a mission following an unknown signal that they still haven't been able to decode over 90 years after first receiving it and they know it's going to take them at least 350 years to reach the source of the signal and can hope to get any answers. I'm really not sure what to make of that ending either. It wasn't the outcome I was expecting and if this turns out to be the first book in the series then I'm definitely going to have to buy the sequel to see what happens next.

The Loneliness of Distant Beings is an interesting read and I do think it has potential as the start of a series, I just wish the author had taken more time developing the relationship between Seren and Dom so I could give it a higher rating.