Review: Owl and the City of Angels - Kristi Charish 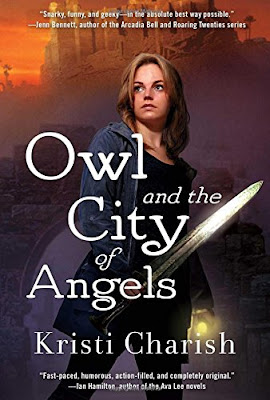 Alix Hiboux, better known as Owl, international antiquities thief for hire, is settling into her new contract job for Vegas mogul Mr. Kurosawa, a red dragon with a penchant for ancient, supernatural artifacts. And now he has his sights set on some treasures of the mysterious Syrian City of the Dead that are sitting in a recluse’s private collection.

There’s just one wrinkle. To stop the resurrection of an undead army that could wreak havoc on Los Angeles, Owl must break into a heavily guarded archaeological sight in one of the most volatile regions in the world. A detour through Libya and a run-in with Somali pirates sends the clock ticking hastily toward total paranormal disaster.

Meanwhile, Alexander and the Paris vampires have stopped stalking Owl’s apartment, but they have by no means forgotten their death grudge against her. To top everything off, Owl finds out the hard way that there is nothing heavenly about the City of Angels . . .

The Adventures of Owl:
Owl and the Japanese Circus
Owl and the City of Angels
Owl & the Electric Samurai (2016)

Review:
Working for red dragon Mr Kurosawa is keeping Owl rather busy as he sends her around the globe to find rare treasures for his collection. She's not averse to helping herself to a few extra items from the sites he sends her too so when she is accused of the theft of a collection of cursed items it's no surprise that even her friends have trouble believing her innocence. The IAA and her boss certainly think she's been up to no good and unless she manages to steal the items back along with some kind of evidence she wasn't the original thief then she's going to be in a whole heap of extra trouble.

If you enjoyed the first book in the Adventures of Owl series I'm sure you're going to enjoy Owl and the City of Angels even more. I love the tomb raiding Indiana Jones type feel to the story and it was great to see Owl exploring more ancient sites and finding all kinds of trouble to get herself into. Owl is an interesting character, she actually irritated me a bit in the first book but we definitely see some growth in this one and although she still isn't perfect she has started to learn from her mistakes. I do want to see her start taking more responsibility for her actions but she's definitely moving in the right direction on that front so I hope she continues making progress.

It's the side characters that make this series for me though, you have sexy and mysterious badass Rynn who has the unenviable job of trying to protect Owl from herself (and if Owl doesn't change the nickname she uses for him soon then so help me god I will strangle her myself!), then there's her fashion loving, sarcastic best friend Nadya who really helps to ground Owl and show her when she's being an idiot, and now we finally get to meet her online friend Carpe face to face. I'm not sure whether I trust him or not yet but he did add some humour to the story. My favourite character in the series has to be her Egyptian Mau, Captain though, trust me if you're ever in trouble with the vampires you need a cat like Captain on your side!

This is a fun series that doesn't take itself too seriously and is very easy to read. The way this story ended left me desperate to get my hands on the next one as one character has been left in a great deal of trouble so I'm glad I don't have to wait too much longer to find out what will happen there.