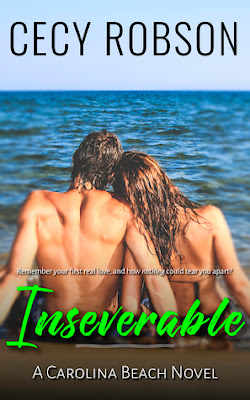 Review:
If you've been following my blog for any length of time you'll already know I'm a huge fan of Cecy Robson's. I love her Weird Girls urban fantasy series as well as her emotional and hard hitting Shattered Pasts and O'Brien Family contemporary romances so of course I was excited about her new Carolina Beach series from the minute I heard about it. I couldn't wait to read Inseverable and it's right up there amongst my favourite of her books, it was lighter hearted and more humorous than her other contemporary series and such a fun story to read. That's not to say that the characters have it all easy but it definitely had a lighter tone and would make a perfect holiday read considering the beach setting.

Trinity and her friends have finished college and are spending one final summer together at the beach where they grew up before adult life has them all heading in different directions, some to further studies and Trinity to a two year tour with the Peace Corps. Callahan was an army sniper but has now left the forces and just needs some peace and quiet to try and recover in. He's suffering with PTSD after watching so many of his friends killed in combat and the last thing he wants is to let anyone close again.  Trinity knows she's not going to be around for long but she can see how much Callahan needs a friend and she's determined to bring him out of his shell, no matter how reluctant he is to let her.

These two were brilliant characters, in a lot of ways they're complete opposites - Trinity is bubbly and outgoing, the life and soul of the party who sees the good in everyone while Callahan is jaded, wary and just wants to be left in peace - but they bring out the best in each other. Callahan desperately needed Trinity to shake him out of his self imposed exile and Callahan makes Trinity feel like a beautiful and sexy young woman for the first time in her life. You could practically feel the chemistry they start throwing off the minute they meet but I loved the slow burn to their relationship, it takes time for Trinity to break through Callahan's barriers and get him to open up but oh boy is it worth the wait and when he finally gives in to his desire their connection is off the charts.

I did get a little frustrated that Trinity didn't open up to Callahan about her plans to join the Peace Corps a little sooner but I could understand why she did it and I loved the way things played out at the end so it's a very minor complaint. Alongside the main couple we also have a great set of side characters, Trinity's group of friends are brilliant and I love how they always look out for each other. The banter between the friends was fun and I enjoyed seeing them help Trinity tease Callahan. I'm excited that we're going to see more of these characters in future books, the epilogue gave us a lovely glimpse into this couple's future but also hinted at whose story is next and I'm definitely looking forward to getting my hands on the next book in the series.