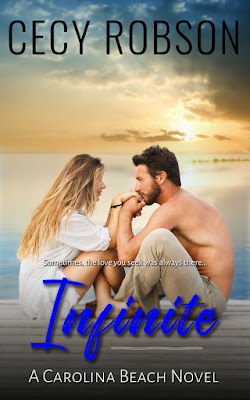 Review:
I love second chance romances and having seen a little of the obvious chemistry between Becca and Hale in Inseverable I was really looking forward to reading their story and finding out exactly what had happened between them. These two have been friends for most of their lives but those feelings grew much stronger when they were teenagers and they finally came close to acting on them the summer after they finished college, just before all their friends went in their separate directions to start their careers. Unfortunately what should have been a perfect night was ruined by Becca's controlling and abusive father and although they've seen each other occasionally since that night ten years ago things have never been the same.

Now Hale is in trouble, he's been falsely accused of fraud and the investigation has put him in the middle of a media storm that is ruining his reputation and about to destroy his business. Becca is a public relations expert and she will do whatever it takes to help Hale fight his corner, even if spending time working closely with him is going to be hell on her emotions. Both of these characters have never really gotten over each other but life got in the way and pulled them in opposite directions. There have been misunderstandings but I was really pleased with the way they discussed things like adults and were willing to listen to each other's points of view. They've both had it tough but have found their own ways to survive and make a life for themselves.

I really loved these two together, Becca is the kind of girl you could easily be friends with, she's sweet, funny and will do anything for her friends. Hale is just as nice, he has made a name for himself in business but he's not ruthless and for once we get to read about a rich, successful business man who doesn't just sleep around with anyone who takes his fancy. It was really nice to catch up with Trinity, Callahan and some of the other members of their friendship group too. Although this story can be read as a standalone fans of the series will definitely appreciate the appearance of those familiar characters.

Infinite was a sweet romance with a really great couple but like with all of Cecy Robson's contemporary romances she's not afraid to touch on difficult subjects so there were some really quite painful scenes with Becca's family in particular. I think this story is all about showing that your family isn't just the group of people you were born into but also the people you choose, the friends that will stick by you through thick and thin, and that's a reminder most of us could use at one point in our lives.