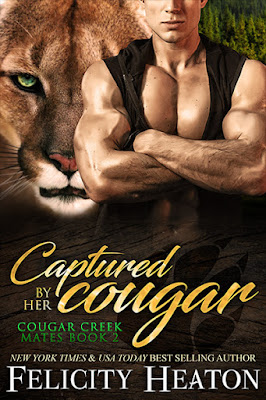 In the wake of an Archangel attack on Cougar Creek, Storm is seething with a need for revenge against the hunter organisation and the key to it might be the petite blonde mortal he’s locked in his cabin, one he’s determined to make sing for him. Only the beauty has a fiery temperament to match his own, and the more time he spends with her, the more she stokes a fire inside him. One that fills him with a startling and undeniable need to make her sing in another way—in his arms.

Gabriella isn’t going to take her captivity lying down. She’s going to give the pig-headed brute holding her against her will hell until he finally believes she’s innocent. He might be a cougar shifter, but she isn’t afraid of him. Or at least she isn’t afraid of what he is. The way he affects her, the flames that lick through her whenever they’re close, terrifies her though, because the longer she’s around the towering sexy-as-sin shifter, the hotter that fire blazes, and it’s only a matter of time before it burns away all her restraint.

With the mating heat and the attack bringing cougars back to the creek, Gabriella is a complication Storm doesn’t need, but she’s one that he wants… because she might just be his one true mate.

Review:
Captured by her Cougar is the second book in Felicity Heaton's new Cougar Creek Mates series and gives us the chance to get to know one of Rath's brothers Storm. Storm doesn't spend much of his time at Cougar Creek, preferring city life instead he has only returned now to help his brothers oversee the gathering and make sure nothing happens to his pack mates. After the recent attack by Archangel they are expecting trouble and Storm is looking for more information. The one person who might be able to provide it is Gabi, the half-sister of the man who led the latest attack who is currently Storm's prisoner. Gabi claims she knows nothing about Archangel and wasn't aware of what her brother had planned but Storm and his family have been hurt by humans before so it isn't going to be easy for her to gain his trust, no matter what his instincts are telling him.

This has been a really fun series so far and I enjoyed this instalment just as much as the first book. These stories are short, fast reads with plenty of humour and a good dose of romance and heat. Gabi is completely out of her depth, she didn't even know cougar shifters existed until her brother launched an unprovoked attack and one changed shape right in front of her, she was horrified by his actions but is also wary of her current situation knowing that she is trapped with no way of escape. No matter how much Storm tries to scare her into talking she refuses to let him intimate her and it doesn't take long for her to understand the fear that is behind his actions. She stands up to him from the very beginning and they have a spark from the moment they meet.

This was a fun story that gave us the chance to see a little more of Cougar Creek and gave us a brief glimpse of both of Rath and Storm's other brothers but we've not seen enough for me to guess which one will be the hero of the next story and I definitely have no idea who their love interests will be so I'm going to enjoy finding out.