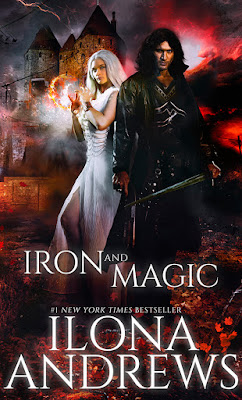 No day is ordinary in a world where Technology and Magic compete for supremacy…But no matter which force is winning, in the apocalypse, a sword will always work.

Hugh d’Ambray, Preceptor of the Iron Dogs, Warlord of the Builder of Towers, served only one man. Now his immortal, nearly omnipotent master has cast him aside. Hugh is a shadow of the warrior he was, but when he learns that the Iron Dogs, soldiers who would follow him anywhere, are being hunted down and murdered, he must make a choice: to fade away or to be the leader he was born to be. Hugh knows he must carve a new place for himself and his people, but they have no money, no shelter, and no food, and the necromancers are coming. Fast.

Elara Harper is a creature who should not exist. Her enemies call her Abomination; her people call her White Lady. Tasked with their protection, she's trapped between the magical heavyweights about to collide and plunge the state of Kentucky into a war that humans have no power to stop. Desperate to shield her people and their simple way of life, she would accept help from the devil himself—and Hugh d’Ambray might qualify.

Hugh needs a base, Elara needs soldiers. Both are infamous for betraying their allies, so how can they create a believable alliance to meet the challenge of their enemies?

As the prophet says: “It is better to marry than to burn.”

Hugh and Elara may do both.

Review:
I have been excited about the idea of a Hugh book since way back when it was just a silly April Fool's joke on Ilona and Gordon's blog so of course I was over the moon when I found out it was actually going to be written after all. Hugh has always been a brilliant villain in the Kate Daniels series and a character that I desperately wanted to know more about but I have to admit I wasn't quite sure how he could be redeemed into a character I could root for. I have total faith in the Andrews writing team though and this isn't the first time they've pulled off the almost impossible, they've managed to make Hugh a complex character, maintain his total a-holeness but still make me love him and that's quite an achievement!

This is the first book in a spin off from the Kate Daniels series, Iron and Magic is designed to be read after Magic Binds but before the final book Magic Triumphs and I would highly recommend sticking to that reading order to get the most out of both series and avoid giving yourself any spoilers. In fact, if you're reading this review before you've read Magic Binds stop right now and go catch up with my all time favourite series. You'll thank me when you're done, I promise!

Hugh has done some pretty inexcusable things throughout the series, he's hurt a lot of characters we care about and caused a lot of trouble for Kate and Curran so I've never looked at him as a good guy but it was still pretty shocking to see Roland abandon him the way he did. Hugh is now completely on his own and it's had a huge affect on him but it is his Iron Dogs that pull him back from the edge. They need him if they're going to survive and Hugh is in a difficult situation because he has no way to provide all the things they need. He ends up seeking a marriage of convenience with Elara, she has a castle full of people and plenty of supplies but they are in danger and in need of protection, Hugh, on the other hand, has trained soldiers who are desperate for a home and willing to fight to defend it.

This isn't a marriage built on love or even on trust, in fact it's far closer to insta-hate because Hugh and Elara rub each other up the wrong way from the moment they set eyes on each other, which leads to some glorious banter let me tell you! This is two leaders who are willing to do anything to protect their people and if that means marrying the enemy then that's what they'll do. Their relationship is gradually changing but there's still a long way to go before I'd consider them a happy couple and I'm really glad about the slow build romance we're seeing here. Romance is definitely not the focus of the story, it's just a nice little extra going on in the background.

Instead the focus is on getting to know Hugh better and meeting some of the Iron Dogs, as well as finding out about Elara and her people. At the moment I have far more questions than answers about Elara but I can already tell you she's totally fascinating and more than capable of standing her ground against Hugh - there couldn't be a more well matched pair than these two. As always with Ilona Andrews books you get the most wonderful side characters and I love that we're introduced to a completely new set of characters here. Hugh is the only familiar face for most of the story (there are a couple of cameo appearances later on though) and even with him we get to learn so much that we never touched on in the main series so there is a lot of new territory to cover here and I loved every minute of it.

This story was everything I could possibly have wanted and I'm so excited to continue reading about Hugh, Elara and their people. It's taken me a long time to write this review because I've been in a bit of a blogging slump lately but I've been completely obsessed with this book since it's release and I've already read it four times so that should give you some idea about how much I love it. As sad as I am that the main Kate Daniels series is coming to an end I'm extremely happy that Hugh and Elara are going to be around to pick up the reigns when Kate and Curran slip off into retirement!