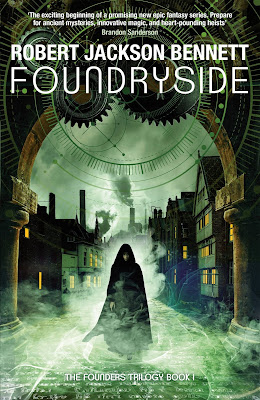 She thought it was just another job. But her discovery could bring the city to its knees . . .

The city of Tevanne runs on scrivings, industrialised magical inscriptions that make inanimate objects sentient; they power everything, from walls to wheels to weapons. Scrivings have brought enormous progress and enormous wealth - but only to the four merchant Houses who control them. Everyone else is a servant or slave, or they eke a precarious living in the hellhole called the Commons.

There's not much in the way of work for an escaped slave like Sancia Grado, but she has an unnatural talent that makes her one of the best thieves in the city. When she's offered a lucrative job to steal an ancient artefact from a heavily guarded warehouse, Sancia agrees, dreaming of leaving the Commons - but instead, she finds herself the target of a murderous conspiracy. Someone powerful in Tevanne wants the artefact, and Sancia dead - and whoever it is already wields power beyond imagining.

Sancia will need every ally, and every ounce of wits at her disposal, if she is to survive - because if her enemy gets the artefact and unlocks its secrets, thousands will die, and, even worse, it will allow ancient evils back into the world and turn their city into a devastated battleground.

Review:
I have a confession to make, Foundryside is the first book I've read by Robert Jackson Bennett and that's something I definitely need to change because it was absolutely awesome! When I was offered a review copy of Foundryside and invited to take part in the UK blog tour I spotted that three of my friends on Goodreads had already read and loved it so I couldn't pass up the change to see exactly what they were all raving about. I'm so glad I did because this is one of the best fantasy books I've read in AGES and I can already tell you it makes it onto my top books of 2018 list.

Robert Jackson Bennett has created a world where people have industrialised magic, they can inscribe symbols on any kind of object that will affect the way that object interacts with reality. Lets say you have something really heavy that you need to ship somewhere, well just inscribe it with symbols to make it believe that its only quarter of its actual weight and away you go. Or how about telling a door that it is only allowed to open under very specific circumstances or for people who are holding a certain object. Want to fly? Well, that one is so complicated that it's actually illegal but it is technically possible if you manage to convince an item that gravity's direction is up not down. You just have to be very, very careful that you don't go too far and end up floating right off the planet and out into space! This world is absolutely fascinating, incredibly well thought out and a joy to spend time exploring.

Of course world building doesn't matter unless you have great characters and a strong plot and Foundryside has all of that and then some. Our main character is Sancia, an ex-slave who now lives in poverty in the Commons and steals from the wealthy Merchant Houses to survive. She has some very special skills (you'll have to read the book for yourself to find out what they are) that make her an excellent thief so when she is offered a ridiculous amount of money to break into an extremely secure warehouse and steal an ancient magical artefact she knows this is her chance to earn enough to completely start over. Of course nothing is ever quite that simple and when she realises what the artefact is capable of there is no way she can just hand it over to her client with a clean conscience.

Along with a ragtag team of unlikely heroes it is up to Sancia to stop an evil plot that could lead to the death of thousands of people. I'm not going to go into more detail than that but what follows is a non stop thrill ride of daring heists, dangerous missions, clever use of magic and fantastic plot twists. Sancia is just one of a multitude of brilliant characters, one of whom isn't even an actual person, and they're all well fleshed out people with their own strengths, weaknesses and motives. I loved every minute of this book and even though it comes in at just over 500 pages this is a story I could have easily devoured in one sitting if I'd had a day free to do nothing but read. As it was I was constantly wishing real life away so that I could get back to my book.

Foundryside is a fantastic start to this series and I'm already desperately waiting for the next instalment but while I wait I'm definitely going to get started on Robert Jackson Bennett's backlist because I have a very strong feeling I've just discovered a new favourite author!


Don't forget to check out the rest of the stops on the Foundryside blog tour: 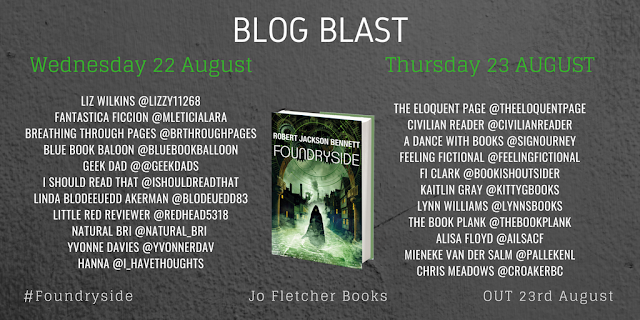