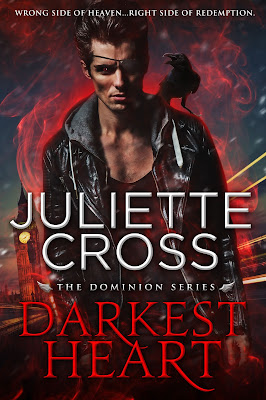 Wrong side of heaven...right side of redemption.

Anya—a stoic, blue-winged angelic warrior— was bitten by a demon prince in battle, and now she has precious little time to find a cure for his deadly venom. But the only archangel with the power to stop the dark poison from corrupting her body and soul is missing. She’ll have to trust her guide, the outcast high demon Dommiel, who is as handsome as he is dangerous if she has any hope.

An outcast of his own kind, high demon Dommiel stays under cover while the war between angels and demons rages on. But when the only person who ever showed him kindness asks for his help, he has no choice but to try to save the angel. Venturing back into the dens he has avoided for so long, Anya makes him want and feel things he never thought possible.

Review:
Anya is an angel on a mission to save the missing archangel Uriel and if that means she has to pair up with the demon Dommiel, a very unlikely ally, then she's willing to take that risk. The journey to find Uriel is fraught with danger but Anya is on a deadline and she knows that failing to find him quickly will have devastating consequences.

I didn't realise when I requested Darkest Heart that this is a spin off from Juliette Cross' Vessel Trilogy and to be honest there were times, particularly at the beginning of the story, that I was a little lost in this world. I think if I'd already read the previous trilogy I would have found this story much easier to get into but as it stands I still have a lot of questions about how angels and demons ended up using earth as a battleground. I got a bit lost when it came to the different groups of fighters and who was fighting for which side. This did get easier in the second half but it made the first half of the book lag a bit while I tried to figure things out so I definitely think people who are familiar with the earlier books will appreciate this one more. Having said that I did enjoy the story enough that I want to go back and read the earlier series and I'm definitely hoping that we're going to get a book about Uriel soon!

Anya and Dommiel are total opposites which isn't surprising when you consider one is an angel and the other is a demon. Anya was a little too innocent for my tastes but she was a very skilled warrior in her own rights and I liked that she was willing to accept her own feelings quite quickly, we didn't have a pages of her doubting herself and Dommiel and instead she was focused on making things work. Dommiel is a reluctant ally at first, once an angel he was stripped of his wings when he fell and became a demon and he now seems to play both sides off against each other. I wish we'd been given more information about his background and what happened to make him fall, he seemed to believe he was betrayed by his brother but I'm still a little hazy on why that is or how it all happened. He may be a demon but Dommiel has his own moral code and there are lines he isn't willing to cross, make no mistake he admits he's done terrible things, but he's not an all out evil character and I think we probably would have seen some of his struggle in previous books.

This is paranormal romance so the attraction between Anya and Dommiel is pretty instant but as far as relationship building goes they did take a little time to act on it. I enjoyed spending time with them both the banter between them was fun and there was a nice amount of flirting as things started to heat up. I'm definitely interested to see where this series goes, especially if we're going to get a book about Uriel, but I think I'll try to read the Vessel Trilogy and the connected novel, The Deepest Well, before I continue reading. Hopefully that will give me a better understanding of the world and help me avoid the sense of confusion I felt reading this one.