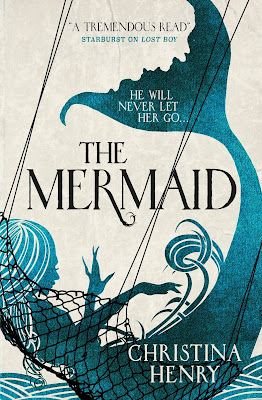 Once there was a fisherman who lived on a cold and rocky coast and was never able to convince any woman to come away and live in that forbidding place with him. One evening he pulled up his net and found a woman in it. A woman with black hair and eyes as grey as a stormy sea and a gleaming fish's tail instead of legs.

The storm in her eyes rolled into his heart. She stopped her thrashing and crashing at his voice, though she did not understand his words. But her eyes had seen inside of him, and his loneliness caught her more surely than the net. So she stayed with him, and loved him, though he grew old, and she did not.

His name was P.T. Barnum, and he d been looking for a mermaid.

Review:
When I first heard about The Mermaid I kind of assumed that it would be a retelling of The Little Mermaid but with Christina Henry's own twist on the story but I was pleasantly surprised to find out that wasn't the case. Instead the author has come up with something uniquely her own, loosely based on PT Barnum's American Museum and the Feejee Mermaid he displayed there.

This book starts with the mermaid Amelia falling in love with a human fisherman but after a loving lifetime together the main story actually kicks off after Jack has died of old age. Amelia is kind of lost without the man she adored, not sure if she'll be welcomed back amongst her own kind she instead decides she'd like to swim to New York and explore more of the human world. Once there she meets PT Barnum and before she really understands what she has agreed to she finds herself on display in his museum.

Life in New York is totally different to anything Amelia has ever faced before and Christina Henry does a fantastic job of showing how wearying it is for her to be constantly under the spotlight with the eyes of the world looking on. Barnum is a conman who is more interested in his profit margin than the safety and happiness of his exhibits but his business partner Levi tries to look after Amelia's best interests.

I loved the mix of real historical figures (although the author does admit that her versions are only marginally similar to the originals) and places with the fantastical idea of a real mermaid being on display. This was really Amelia's tale though, a story about her finding her place in the world and refusing to conform to society's expectations for her. Add in a hint of romance and a satisfying ending and Christina Henry has picked up a new fan in me - I'm definitely looking forward to making a start on her backlist!