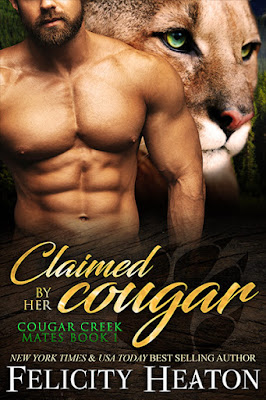 Having lost his parents and mate in a brutal attack on his cougar shifter pride by a hunter organisation, Rath burns with a need to keep humans off his land and out of his life. He'll do whatever it takes to protect his pride from them, but when a lone female wanders into his territory, it isn't a burning need to drive her away he's feeling and it isn't his pride that needs protecting - it's his heart.

Down on her luck, Ivy follows a lead to a spot where she hopes to photograph black bears, but what she discovers there is a mountain of a man who lacks manners and seems determined to drive her off his property - a man who stirs unbidden fire in her veins and a strange sense of home.

With a pride gathering on the verge of happening at Cougar Creek and the air charged with a mating heat, the last thing Rath needs is a human on his land, especially one as beautiful and alluring as Ivy, one who rouses a fierce need to fight for her, but he can't convince himself to let her go... and that proves dangerous for them both.

Review:
Claimed by her Cougar is the first book in Felicity Heaton's new Cougar Creek Mates series, this is a spin off set in the same world as the Eternal Mates books but can be read completely separately. I don't believe there will be any crossover of characters in this series so you won't be lost if you start here.

Rath's parents and mate were killed in an attack on their pride by a group of Hunters and ever since then he ha done everything in his power to protect the survivors. Cougars tend to be solitary creatures so although they have a meeting point where they can come together for gatherings most of the time they roam alone or in small family groups. Rath is preparing their isolated home ready for a gathering when a human enters their territory, he has sworn to keep their community secret and the last thing he needs is a woman walking around taking pictures but his instincts want him to claim the stranger rather than send her on her way. Ivy is a photographer who is searching for bears when she comes across Rath and his home, she knows nothing of shifters and has no idea what she has stumbled into but when danger comes calling she has to decide what path her future will take,

If you've read any of the Eternal Mates books you'll know what to expect from this series, Felicity Heaton always writes great paranormal romances with characters that are easy to root for, sweet and sexy romances and a nice amount of action thrown into the mix. We haven't met many members of the pride yet but I'm already looking forward to Storm's story and to meeting the rest of Rath's brothers too. These are the perfect kind of story for when you just want something quick and satisfying to read and I'm glad we don't have to wait long for the next release!