Review: Haunted by the King of Death - Felicity Heaton 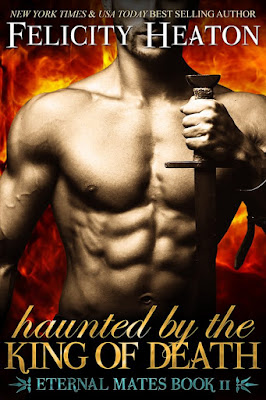 A ruthless vampire warrior, Grave Van der Garde rules the mercenary Preux Chevaliers with an iron fist, determined to retain his hard-won position as one of the most powerful men in Hell and his reputation as the heartless King of Death. But beneath the cold façade beats the heart of a vampire torn between love and hate, ripped in two directions by a single ethereally beautiful female—his fated phantom mate.

Driven by her phantom instincts, Isla used a spell to make her solid in order to deceive the vampire who killed her sister’s demon mate and have revenge on him, condemning him with a single kiss to become a phantom too. But her plan took an unexpected turn when she fell in love with him, and with her new life, and the night she betrayed him shattered both of their hearts. Now, he lives to make her suffer through their connection, one that is fading with them as they begin to slip into the phantom world, and she must face the monster she created if she is to save herself and the vampire she still loves.

With a demon from Grave’s past determined to destroy him and everything he holds dear, and the clock ticking down to their inevitable doom, can he and Isla overcome their past and their pride to work together to claim the future they both desire deep in their hearts? Or will death finally catch up with the vampire king and his phantom mate?

Review:
Unlike the previous couples in this series Isla and Grave are already mated but a series of misunderstandings and betrayals have turned them into bitter enemies and neither of them has any intention of forgiving the other. They have spent the last 100 years apart and that time has just allowed their resentment and anger to grow so it's fair to say that this couple have major issues to deal with. Unfortunately for them they can't avoid each other forever, there has been a nasty side effect to a spell that Isla placed on Grave and now if they don't work together to fix things it'll end up killing them both.

It's not easy to work with someone you can't trust, especially when that person is someone you loved who went on to betray you in the worst possible way. Grave has every reason to hate Isla and it was easy to see his point of view but at the same time Isla had very good reasons for doing what she did and she has regretted her actions for a long time now. I have to admit I found it a little frustrating that Isla was able to understand why Grave was so twisted up about their relationship one minute but then the next she expected him to put it all behind him like it was nothing and was angry when he didn't trust her. I wanted her to be a bit more apologetic for what had happened between them but that really was a minor irritation when I enjoyed so much more about the story.

One of the things I loved the most was the chance to catch up with some familiar faces from the Vampire Erotic Theatre series. I don't want to say too much about it but fans of the previous series will love the surprises in store for them. Haunted by the King of Death also introduces some great new characters and I really want stories about Isla's brother-in-law and Grave's brothers in the future. The story is full of action, has a great romance and has started to bring back old characters as well as new ones which is a trend I'm really hoping continues in the future.