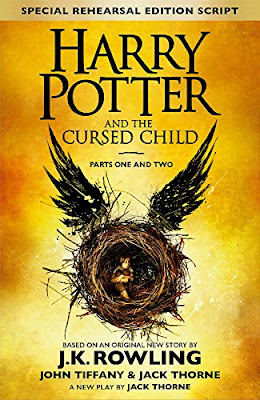 It was always difficult being Harry Potter and it isn’t much easier now that he is an overworked employee of the Ministry of Magic, a husband, and father of three school-age children.

While Harry grapples with a past that refuses to stay where it belongs, his youngest son Albus must struggle with the weight of a family legacy he never wanted. As past and present fuse ominously, both father and son learn the uncomfortable truth: sometimes, darkness comes from unexpected places.

Based on an original new story by J.K. Rowling, Jack Thorne and John Tiffany, a new play by Jack Thorne, Harry Potter and the Cursed Child is the eighth story in the Harry Potter series and the first official Harry Potter story to be presented on stage. The play will receive its world premiere in London’s West End on July 30, 2016.

Review:
I've put off writing this review for a long time, mainly because it pains me to be even slightly negative about anything Harry Potter related. I fully confess to being a major Harry Potter fan, I love the series and I have spent far more money than I should have collecting all manner of fan merchandise not to mention the countless hours I've spent rereading the books and binge watching the movies. So obviously I was over the moon excited when I first heard about Harry Potter and the Cursed Child and I preordered it the moment it appeared on Amazon. I'll admit I was a little disappointed that it was only being published in script version and not as a full novelisation and it definitely took a little while to get used to the different format but that was the least of my problems with this book so it hardly seems worth mentioning.

I was really looking forward to meeting the new generation of witches and wizards, sure I was expecting to see Harry, Ginny, Ron & Hermione in supporting roles as loving parents but I wanted the focus to be on the children. There are endless directions that this story could have taken and I have to say in the beginning I was just so thrilled to be back in this world that I was enjoying every minute of it. I loved the first meeting between Albus and Scorpius, I enjoyed their journey to Hogwarts and the sorting hat ceremony was great. But then it all started to feel a little repetitive, as much as those scenes fly by fairly quickly they were just too close to the original story and I was waiting for the characters to veer off in their own direction.

Unfortunately instead of something fresh and exciting we got a rehash of old plot lines, worse than that we had the books we know and love turned upside down and the rules of the universe were completely changed to make that possible. Things that were impossible in the original books were suddenly happening easily in the new story, people we know and adore were acting completely out of character and others who could have had really interesting tales to tell weren't even included. You'd be forgiven for thinking that Harry only had one child not three for all that we saw of the other two and I actually found myself not liking Harry very much which was nothing short of shocking. Ron and Hermione were no better and Ginny might as well have been completely absent for all the use she was. I'd rather have had a brand new story where the original characters just waved their kids off at platform 9 and 3/4 and weren't seen again until the holidays (a bit like the Weasley parents who had minor but loveable roles in the earlier books) than have them turn into cardboard cutouts of themselves.

I'm just left feeling a little bit heartbroken that a story that could have been amazing managed to fall so flat. Don't get me wrong it isn't all bad, revisiting Hogwarts is always a treat and I absolutely adored Scorpius (who'd have thought I'd find myself loving a Malfoy!). I also think that the script format doesn't help with the characterisation so I'm hoping that seeing it in play format will help bring the characters to life more. I didn't love the book but I'm still very excited that I have tickets to the play, even if I do have to wait until June next year to see it! I just hope that if J.K. Rowling decides to write (or approve) any further stories set in this world she won't continue to keep messing with the original plotlines. The wizarding world is a huge and wonderful place so surely there are a million new directions she can take us.