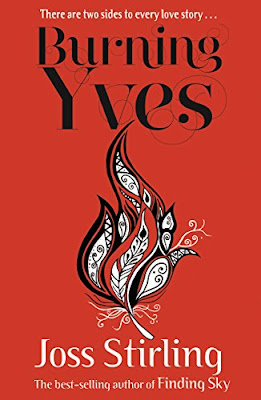 In this FREE explosive short story, discover what Yves Benedict was thinking when he met his soulmate Phoenix for the first time.The Benedict brothers all have different abilities and powers. One can move things with his thoughts alone, another can heal. Yves Benedict is the second youngest of the seven brothers and he has the ability to set things on fire with his mind. This means he must keep a tight rein on his emotions which isn’t easy when he meets his soulmate . . . Phoenix is nothing like Yves imagined. She’s secretive, elusive and a thief. Yves lives by a strict code of honour and Phoenix is tangled up in a web of crime. But their fiery attraction cannot be denied.  Sparks will fly as their destinies and hearts collide.  A brilliant addition to the Finding Sky series for both new and old fans alike.

Review:
Burning Yves is the second of Joss Stirling's free short stories in the Savants series and it gives us a second chance to see the first meeting between Yves and Phoenix but this time from his point of view. Again I'd recommend reading the short story after the main book (Stealing Phoenix) so you're familiar with the characters.

The story starts a little before the beginning of the first book and it's nice to get a chance to see inside geeky Benedict brother Yves' head. He's not as confident as the rest of his brothers and feels a little like the odd one out but he's also extremely intelligent and loves to learn. His first meeting with Phoenix doesn't exactly go to plan since she attempts to rob him but he's surprisingly protective of the would be thief.

I don't think I enjoyed this one quite as much as Challenging Zed but it was still a fun, quick read and I'm sure fans of the series will enjoy eat up any chance to spend more time with the Benedicts!

Source: Free ebook short story can be downloaded from Amazon