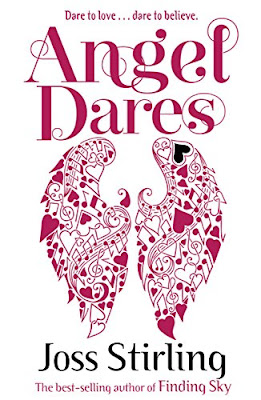 Angel is impulsive.
Disguising her savant ability to control water doesn't come easily to her.

Then she meets the broodingly handsome Marcus at a music festival where they're both performing, and finds herself all at sea. For when he sings, her soul answers with its own music.

Like the tide, their mutual attraction cannot be held back but Marcus's mistrust of Angel's gift is even stronger. How can they ever be together if Marcus is unable to accept who Angel is or what they could mean to each other?

And with the net closing in on the Savant community - it is time for everyone to choose a side.

Review:
This series is a bit of a comfort read for me, the books are all cute, funny and incredibly easy to read and they're perfect palette cleansers when I'm in the mood to read something light hearted. I love the concept of the Savants, for anyone new to the series Savants are people born with some kind of psychic ability, they all have completely different powers so you never know quite what idea the author will come up with next so it's always interesting to see how each of the characters abilities work.

Angel Dares is a perfect summer read since most of it takes place at a music festival. We met Angel in the previous book so this story gives us a chance to catch up with previous couple Misty and Alex as well as some of the other Benedict brothers that we've all fallen in love with along the way. Angel is a talented musician and singer and along with her band she's at the music festival hoping to land her big break, the last thing she expects is to stumble across her soulfinder. Angel is a little wild and very impulsive which has a tendency to get her in trouble, her Savant powers allow her to control water which makes for a fancy party trick but she has to work very hard to keep her secret because using her ability is second nature to her and she has a habit of using it as a way to calm down when she's nervous. Marcus is her complete opposite in most ways, he's also a talented musician but he's part of an already successful group and they're headlining the festival. He is much more serious than Angel and doesn't really know what to make of her, it really doesn't help that he knows nothing about the Savant community either he doesn't even know that he has an ability so the whole thing comes as quite a shock to him, especially when Angel starts talking about Soulfinders and communicating with him telepathically.

I loved Angel, she was so much fun and she's definitely the kind of girl you'd want to be friends with. Marcus is harder to like and at times he really annoyed me because of the way he treated Angel. I get that she threw him for a loop and he was struggling to know how to react to her but let's face it he was a bit of an arse at times and there were moments when I found it hard to root for them as a couple. No matter how much he irritated me one minute he did have some incredibly sweet moments and the more you find out about him the easier it is to understand where he's coming from, I wish he'd come around just a little sooner (and I could have done without one particular event towards the very end of the book) but it all worked out in the long run so I've forgiven him now.

I love that there is always some kind of mystery or extra element to these stories alongside the romance and it looks like the Savants are now facing an enemy who is determined to get evidence of their powers and expose them to the general public. I'm not going to go into more detail for now but I will be very interested to see how that continues to play out throughout the series. I also love that we're getting to see the older Benedict brothers find their soulfinders throughout the series, I get that they're a little old to be main characters in a YA series (although I really would have loved separate books about each of them!) but this is a nice way to tie all of the stories together. It's Will's turn to fall in love in Angel Dares and I'm really hoping Victor will be up next as he's always been my favourite! The main character of the next book, Summer, is best friends with both Angel and Misty so I'm sure we'll be seeing more of them and I'm hoping with the introduction of a new group of Savant characters means that the series might continue on beyond Summer Shadows.