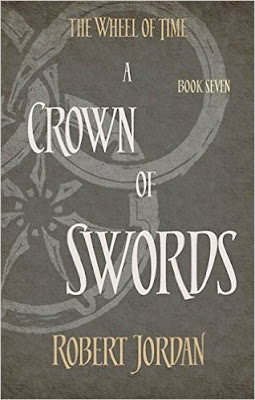 Rand al'Thor, the Dragon Reborn, has escaped the snares of the White Tower and the first of the rebel Aes Sedai have sworn to follow him. Attacked by the servants of the Dark, threatened by the invading Seanchan, Rand rallies his forces and brings battle to bear upon Illian, stronghold of Sammael the Forsaken . . .

In the city of Ebou Dar, Elayne, Aviendha and Mat struggle to secure the ter'angreal that can break the Dark One's hold on the world's weather - and an ancient bane moves to oppose them. In the town of Salidar, Egwene al'Vere gathers an army to reclaim Tar Valon and reunite the Aes Sedai . . .

And in Shadar Logoth, city of darkness, a terrible power awakens . . .

Review:
I've fallen so far behind our group buddy read of this series thanks to this book. I read it back in
July and I've spent the last couple of months trying to pretend it never existed. I was so in love with this series, yes there were problems with it but I was still completely hooked on the story and eager to find out what would happen next, but then I read A Crown of Swords and it nearly ruined everything.

I've ignored the fact that nearly every single female character spends half their time acting like an idiot and the rest screeching like a fishwife; I've put to one side the fact that Robert Jordan is pretty hopeless at creating believable romantic relationships (seriously do any of the couples actually speak to each other or do they all just stare longingly across the distance before suddenly declaring themselves head over heels in love?); and I've not even minded the way the story is taking so long to actually get anywhere but I can't ignore Tylin's actions in this book. I've tried so hard to forget about it but every time I think about this book I want to start screaming. There is just nothing on this planet that can justify the direction the story took and even though I'm sure there were lots of other brilliant plot developments in this instalment I can't remember a single one of them because they've all been eclipsed by Tylin the rapist queen.

I'm going to give the author the benefit of doubt and assume he meant for the scenes between Mat and Tylin to be amusing but he couldn't have missed the mark more badly if he'd tried. If Mat (or any other male character) had forced Tylin to sleep with him at KNIFE POINT there would have (rightfully!) been uproar. Just because Tylin is female she seems to get away with it but rape is rape and it is NEVER acceptable. It's not something that should be used as an "amusing" plot device either because it is NOT a laughing matter. The way she stalked Mat was downright creepy and it got to the point where every time her name appeared on the page I started feeling nauseous but when we reached that scene with the knife I nearly broke my kindle by throwing it across the room. Just what was the author thinking putting that scene in there? Where were the editors? Why did nobody think to question it before it was sent out into the hands of the unsuspecting public?

I'm sure there were good parts to this book because I wouldn't have made it to the end if there hadn't been but I literally can't remember a single thing that happened apart from the scenes with Mat & Tylin. I know that sounds crazy considering Tylin wasn't even on the page for at least three quarters of the book but she's such a sore point that it's all that stuck in my mind. I have such mixed feelings about A Crown of Swords that I'm not even sure that I want to carry on reading this series anymore but I've invested so much time in it that I feel obliged to see it through to the end. Fellow buddy readers have assured me that Tylin isn't even mentioned in The Path of Daggers and at the moment that's the only thing enticing me to give it a try. I really, really hope that Robert Jordan can rekindle my love for the series with that book but he's got his work cut out and at the moment I'm not holding my breath.