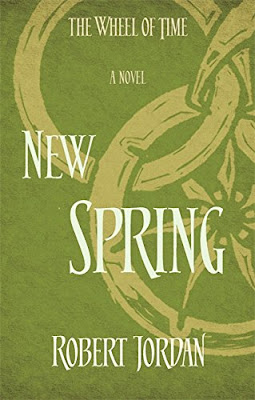 The city of Canluum lies close to the scarred and desolate wastes of the Blight, a walled haven from the dangers away to the north, and a refuge from the ill works of those who serve the Dark One. Or so it is said. The city that greets Al'Lan Mandragoran, exiled king of Malkier and the finest swordsman of his generation, is instead one that is rife with rumour and the whisperings of Shadowspawn. Proof, should he have required it, that the Dark One grows powerful once more and that his minions are at work throughout the lands.

And yet it is within Canluum's walls that Lan will meet a woman who will shape his destiny. Moiraine is a young and powerful Aes Sedai who has journeyed to the city in search of a bondsman. She requires aid in a desperate quest to prove the truth of a vague and largely discredited prophecy - one that speaks of a means to turn back the shadow, and of a child who may be the dragon reborn.

Review:
New Spring is technically a prequel to the Wheel of Time series (it's about events that occurred approximately 20 years before The Eye of the World) but I was advised to read it after book 10, Crossroads of Twilight, to avoid accidental spoilers. I'm not sure there were any major spoilers hidden in here but it definitely gives you an idea about which of the Aes Sedai can and can't be trusted so I can see why I was told to hold off on reading it until this point in the series.

I'm really torn about how to rate this book, yes it was interesting to see how Moiraine and Siuan got involved in the search for the Dragon Reborn and I liked seeing a younger version of Lan but I'm not sure this actually gave us any new information that we haven't already discovered throughout the rest of the series. There weren't any major new revelations and it's hard to build tension in a story when you already know the outcome of events that follow on from it.

It's also hard to be happy when you see how horrible one of your favourite characters used to be when they were a new Aes Sedai. I've always loved Moiraine, she is manipulative and she keeps far too many secrets but she's an interesting character and I always felt that she's trying to do the best for the people around her. Young Moiraine isn't a nice girl though, she's just as manipulative but she also has a vicious streak and the way she treated Lan was absolutely appalling. He's not the only person she made to suffer but because I'm so attached to his character I felt really bad for him. I just lost respect for Moiraine because she's so petty and willing to act as judge, jury and executioner for people she's barely met.

It didn't help that we also got to meet Lan's carneira Lady Edeyn and once again a woman in the Wheel of Time series is a nasty piece of work. She took Lan's virginity when he was 15 (and she was in her 30s) and according to custom that gives her some kind of control over his life so she is now able to manipulate him back into her bed - somewhere he quite clearly didn't want to be! It's like the Tylin and Mat scenes all over again except Edeyn is plotting to marry Lan off to her daugher even while she's forcing him into her own bed. How did Robert Jordan consistently manage to create such horrible women and messed up relationships? I can't think of a single female character that I've liked throughout the entire series because he keeps turning them into whiny harpies or sex offenders and I'm so sick of that now. All the men are pushed around by nasty manipulative women and the Aes Sedai get away with murder because everyone else is terrified of them. At this point I'm half hoping Rand will go crazy and destroy the world!

In spite of the issues mentioned and the fact that the plot moved at a snail like pace for at least the first two thirds of the book I still found myself enjoying it though. I don't know quite what that says about me but there you have it - I've obviously lost all sense of perspective when it comes to this series. I'll just say that I'm glad we're closing in on the end now, I almost wish I'd never started reading it but I'm really hoping that the last few books will be amazing enough to make me forget about the drudgery from the middle of the series.