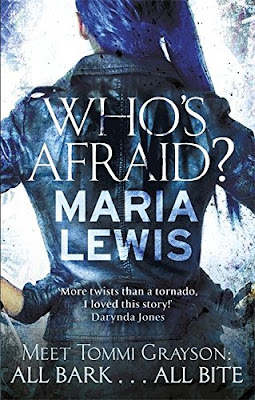 'It was like my wolf had been there all along, waiting for me to tap its hand and step into the ring . . .'

Tommi Grayson's never exactly been a normal girl. Bright blue hair, a mysterious past and barely controlled rage issues have a way of making a woman stand out. Yet she's never come close to guessing who she really is . . .

When her mother dies, a shattered Tommi decides to track down her estranged father. Leaving Scotland for a remote corner of New Zealand, she discovers the truth of her heritage - and it's a whole lot more than merely human.

Barely escaping with her life, now Tommi must return to her her friends, pretending everything is normal, while all too aware of the dangers lurking outside - and within. Worse still, something has followed her home . . .

With the clock ticking, can Tommi learn to control her new powers in time to save the ones she loves?

Mixing elements of fantasy, mystery and romance, Who's Afraid? is a must-read tale about one woman who takes on the world, one bite at a time

Review:
It's no secret that urban fantasy is one of my go to genres and I'm always excited to discover new books to cram on my overflowing shelves. Who's Afraid? is a debut novel by Australian author Maria Lewis and although it's an interesting start to a new series I did have a few issues with it.

When Tommi's mother dies she decides to travel to New Zealand to track down the father she never met but what she discovers when she meets the Maori side of her family will change her life forever. Tommi had no idea that her father was a werewolf from a powerful and dangerous family and now her life is at risk so she needs to learn how to defend herself and she needs to do it fast.

I have really mixed feelings about Tommi, she has a great group of friends and when she's around them she can be a really fun character but there were times when I just thought she was incredibly nasty. She can be very mean about people she's never met and I'm just so sick of reading about characters who think that the only way to prove they're strong and independent is to hate on other women. Why is it mainly female authors that write about women knocking each other down? Do characters have to make nasty comments on other women's looks and clothes just because those women are interested in dating their friends? It's not just women that Tommi is down on though, she makes rude remarks about artists she works with too and it just makes her look jealous and petty. I think the author has just tried too hard to make Tommi "cool" and in the end her attitude has made her pretty dislikable. Tommi does improve towards the second half of the book but I need those changes to be consistent for me to want to carry on much further with this series.

I liked the way the werewolves change is portrayed, it's painful and confusing and the first time it happened to Tommi was incredibly well written. You are right there with her feeling shocked and terrified about what is happening to her and I thought it was cleverly done. I also liked the mentoring system and the way Tommi had Lorcan around for backup and assistance when she needed him. He's an intriguing character and I think I'm actually more interested in him than I am in Tommi at the moment. I also thought that some things came a little too easy for Tommi, she is a brand new werewolf yet she manages to master some powerful abilities that would usually take years to learn so that was a bit unrealistic.

I think my biggest issue was with the portrayal of her Maori family though, I'm all for books with diverse characters and that should have been a huge selling point for Who's Afraid? but it's completely negated by the fact that every Maori character is a bad guy. The whole Maori pack is apparently evil and the way they treated Tommi certainly holds true on that but I don't like the way an entire minority group has been portrayed. I find it offensive and quite frankly a little racist.

If I'm honest I'm not sure if I'll end up continuing this series, there is potential there but it doesn't hold a candle to authors like Patricia Briggs and Ilona Andrews. It is only a debut though so I kind of feel like I should give Maria Lewis one more book to show me what she's really capable of. I guess I may try the sequel at some point but I'm certainly not going to be rushing out to preorder it.