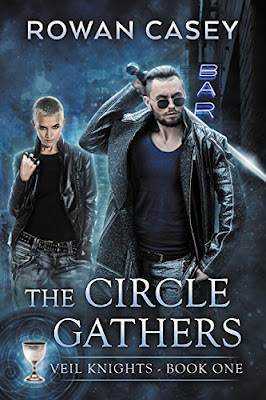 Not all legends are make-believe...

Three years ago, Jessie “the Berserker” Noble was at the top of the MMA fight game, a world-title contender with a brilliant future ahead of her. Then the visions started and her world came crashing down. Hard. Now Jessie’s a shadow of her former self, taking no-holds barred fights in the underground circuit to earn just enough to buy the drugs she needs to keep the horrible things she sees at bay.

When a man named Dante Grimm tells her she’s the modern incarnation of a champion of old and that she and her soon-to-be companions are desperately needed to hold back the darkness to come, Jessie thinks he’s as insane as she is.

But Grimm’s far from crazy. There is a battle coming the likes of which the world hasn't seen in centuries, a battle against a foe straight out of their worst nightmares.

And for them to succeed, Jessie going to have to dive deep into the heart of the very thing she's been running from all this time - her visions.

Rowan Casey is a pseudonym for twelve bestselling authors who are writing together in a shared world. For more information about each of the author's click on their names to visit their websites:
Lilith Saintcrow, CJ Lyons, Joseph Nassise, Steven Savile, Annie Bellet, Jon F. Merz, Pippa DaCosta, Robert Greenberger, William Meikle, Steve Lockley, Hank Schwaeble, and Nathan Meyer

Review:
In case you missed it Rowan Casey is a pseudonym for twelve bestselling authors who have come together to write in a shared world. The authors involved are Lilith Saintcrow, CJ Lyons, Joseph Nassise, Steven Savile, Annie Bellet, Jon F. Merz, Pippa DaCosta, Robert Greenberger, William Meikle, Steve Lockley, Hank Schwaeble, and Nathan Meyer but it was Pippa DaCosta's name that got me excited about the series. I've absolutely loved everything else Pippa has written so I went into this with extremely high hopes and I hate to say this but unfortunately I was disappointed.

I know that the first book in any series has a lot of work to do, it has to introduce a whole bunch of new characters, give readers an idea about the rules of the world and at the same time it needs to include enough of a story to make it an enjoyable read. It's not always an easy task and I tend to judge first books a little less harshly because of that. There is no doubt that the series has potential, anything with the tagline "Arthurian myth meets urban fantasy in this new series" definitely gets my attention, but The Circle Gathers just didn't hit the mark for me.

Jessie is an interesting main character, she was a top MMA fighter but her world crashed around her when she started getting visions of strange worlds and even stranger creatures. She turned to drugs to try and block out the visions and now fights in an illegal underground club trying to earn enough money to pay for her next fix. I had to suspend belief a bit that someone who has been taking heroine for two years would still be fit enough to not just take part in a fight club but to actually win every match and I also thought it was ridiculous that she was just able to immediately stop the drug taking when she was offered a chance at a better quality of fight. I don't think addictions are quite that easy to walk away from! As interesting as Jessie is I just don't find her a realistic or even a particularly likeable character but that may change as we get to know her better.

I think where it really went wrong was trying to introduce too many different characters all in one go, towards the end of the book we're thrown in at the deep end and introduced to all the different Knights and it was really hard to keep track of them. I'm assuming that each story will focus on a different Knight which could be interesting but at the moment I don't particularly feel invested in either the group or any of the individuals. Since this is quite short it might have been better to focus on Jessie and perhaps introduce just a couple of the others. It would also have been nice for there to have been more of a plot, this doesn't feel like a complete book and it ends just as things are starting to get interesting.

Like I said I do think the series has potential and I've already bought the second book, Hound of Night, so I'm hoping that this'll be where the series hooks me in properly.