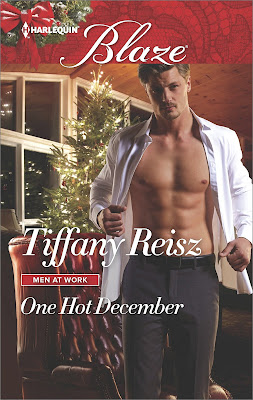 Never mess with a woman who carries a blowtorch in her backpack. Welder and artist Veronica "Flash" Redding's playful sense of evil sometimes gets the better of her. Like when her insanely handsome, wealthy, suited-up boss gave her the most sensuously wicked night of her life . . . then dumped her. Yep, revenge is a dish best served hot.

Only Ian Asher isn't letting Flash get away quite so easily. He's not ready to forget the intensity between them. The searing heat when they touch. And the deliciously demanding control Ian wields in the bedroom. Now he has only the holidays to convince Flash that they belong together . . . and that even the most exquisite, broken things can be welded back together.

Review:
Flash is an artist who loves using her welding skills to create metal sculptures in her spare time. A girl's got to pay the bills though and she also enjoys her day job working as a welder for a local building company. Work got a little more interesting when Ian took over the role as her boss, she was attracted to him from the beginning and after a night out drinking with colleagues they ended up spending a scorching hot night together. Unfortunately for Flash Ian dumped her the following day and now things are extremely awkward between them.

Ian had been fantasising about Flash for months before they spent the night together but fraternisation with coworkers is strictly forbidden and as Flash's boss he has to set a good example to his workers. He regretted having to walk away but he was in a position of power over her and he refused to take advantage of it. Then Flash hands in her notice and Ian knows he can't let her walk out of his life, he just has to find a way to convince her to give him another chance.

Each of the books in the Men at Work series do work as stand alones so although I'd happily recommend all of them you can read them in any order you like, I would suggest reading the free prequel short story Ian's Dream Girl (which you can find on the Harlequin website) before starting One Hot December though. It lets readers see the first night that Flash and Ian spent together which is a nice bit of background information not included in this book which picks up the pieces six months of awkwardness later.

I've enjoyed all of the books in this series but I have to say that unfortunately this was the weakest of the three. I really liked both of the characters, it was great to see a woman who is so confident in herself and not intimidated by the men around her. Flash is a tattooed tomboy on the surface but she's so much more than that and it's always nice to read about multifaceted characters, she is someone you can easily imagine being friends with and that always makes me enjoy a story more. Ian is great too, I don't think he handled things very well after their one night stand but he does explain his actions and it was obvious he was trying to do the right thing. I liked how open they were with each other and that when there was a misunderstanding between them it wasn't dragged out into a load of unnecessary drama.

I think my main issue was that the banter between them felt a little forced in places. It was still fun to read and did make me smile at times but it was also very similar to the flirting between the first two couples in the series. Where it hit the spot perfectly in the first two books there was something just a tiny bit off in this one. I know that's a very vague complaint but I can't seem to find the words to clarify it better than that. This is still a fun read and overall I've absolutely loved the entire series, the books are all very light hearted, hilarious and sexy too. I'm a huge fan of Tiffany Reisz and she continues to be a must buy author for me. I can't wait to see what she comes up with next.