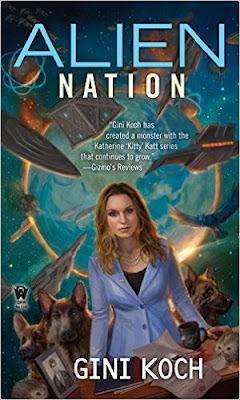 It's a typical day of bureaucracy and stress for President and First Lady Jeff and Kitty Katt-Martini, made more stressful when alien spacecraft are spotted making a beeline for Earth, none of them from the Alpha Centauri system.

Then a cryptic request from an old adversary pulls Kitty out of the White House and into an explosion - and an even more explosive situation. Not only is the Mastermind back in the game, influencing the Club 51 True Believers to find and destroy all Centaurion bases, but he's also found a dangerous benefactor and created some frightening new cloning abilities. And, just to make things a little more challenging, those alien spacecraft are coming to as Kitty for protection, and asylum on Earth.

Police stations being blown up and war helicopters in play aren't enough to keep Kitty down, especially when she's got some new alien friends helping out. But what these aliens share will rock the world - the other aliens on their way to Earth are fleeing an enemy so terrifying that even a Z'porrah ship is trying to get to Earth for safety and protection. And if Earth isn't able to stop this threat, there may not be anything left of humanity.

Now Kitty and Company have to figure out where the Mastermind is and stop him before any new aliens land. And then they have to save the world from a deadly invasion. Or, as Kitty calls it, Thursday.

Review:
14 books in and this series is stronger than ever! Once again Gini Koch has managed to up the stakes, this time bringing in a whole host of new alien species who are all headed to earth seeking sanctuary from a terrifying new enemy. I don't know where Gini gets her ideas from but you can look forward to meeting some fun new characters in Alien Nation.

This series never has a chance to grow stale because it's constantly evolving and I honestly don't know how Gini manages to create such intricate plots that have spanned over so many books. We've known who the Mastermind is for a couple of books now but Kitty and co finally get a chance to take out their enemy once and for all, if only they can stop him before he kills Jeff and the rest of the world leaders in one fell swoop that is.

I'm so glad we're back to seeing Kitty do what she does best, she has a unique way of looking at every situation and she's brilliant at finding new allies but more than anything she is able to kick ass with the best of them. There is just no stopping our girl when people she cares about are in danger and since she has such a huge heart that includes a massive circle of friends and adopted family members. This series has such a huge cast of characters but they're all so well drawn out that I never have any problems keeping track of who everyone is and I just have so many favourites whose stories I'm invested in.

None more than Kitty and Jeff though, they're such a brilliant couple and I love spending time with them. I'm so pleased that this series is still going strong and I'm looking forward to lots more future adventures in this world.