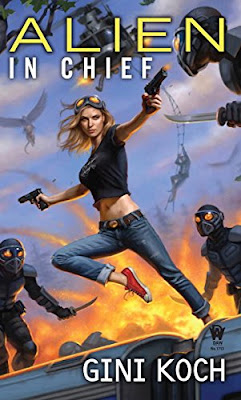 The Mastermind has upped his game . . .

As Kitty can tell you, it's not easy being the wife of the vice president - especially not when he's an alien fom the Alpha Centauri system. And being a parent of preternaturally talented children, don't even go there. But she and her A-C husband, Jeff, have learned how to roll with whatever life and the bad guys throw at them - they think.

Kitty & Company have been savouring a few months of quiet since they got back from Beta Eight. But suddenly their peace is shattered by the arrival of a mysterious female assassin - who might be Jeff's missing niece, Stephanie. And that's just the beginning of the fun.

When the Alpha Centuri Planetary Council requests a visit with the president and vice president, things look politically dicey. When the most dangerous prisoners in the most secure supermax prison escape with ease, things look bad. But when the Mastermind releases a virus that kills people in a week, things go to Defcon Worse fast.

Now it's up to Kitty to save everyone important in the U.S. government - including her mother, her husband, and herself - before the virus spreads through the rest of the country, and then the world. Plus she's facing invisible attackers, crazed assassins, a teenager in hiding, the most dangerous train ride ever, the disappearance of her beloved flyboys, and a mysterious alien who could be an enemy or the ally she needs.

And this time, the Mastermind's made it very personal. Either he's going down . . . or Kitty is.

Review:
It's not often you can reach book 12 in a series and still have an author surprise you with the direction the story takes. There aren't many authors out there like Gini Koch though and not only is she an expert at creating action packed stories that are full of sub plots upon sub plots run by a huge cast of wonderful supporting characters but she also fills her books with so much humour that they never fail to make me laugh out loud. Kitty is undoubtedly one of my favourite characters, she comes up with such hair-brained schemes and you can honestly never guess what she'll try next but you know for sure she'll come out fighting and that any bad guys in the vicinity had better watch out.

We have been watching the Mastermind pulling the strings for a long time now, he's done a lot of despicable things and caused the deaths of some much loved characters but now Kittye and crew are onto him and they're working hard to bring him down. Unfortunately it's not quite as simple as calling him out since they have absolutely no evidence to use against him and they're pretty sure he has several back up plans in place in case anything happens to him. It's no use cutting off the head if the hydra is just going to grow a few more replacements so this really does need to be done carefully. Unfortunately the Mastermind has a few more tricks up his sleeve and when he kicks off one of his Doomsday plans Kitty realises that the people she cares most about are in more danger than they've ever faced before.

You're in for a crazy journey in Alien in Chief so you should just sit back and enjoy the ride. Crazy fight scenes, snake attacks, a deadly virus, alien visitors, invisible armies, old enemies finally getting what they deserve, new allies found, old allies lost and so much more can be found in these pages. The fun never stops but you should also be prepared for a few tears because not everyone makes it to the end of the book. Things have also taken a really interesting turn and the future is about to get extremely interesting for Jeff and Kitty as the series continues. I can't wait for Camp Alien!