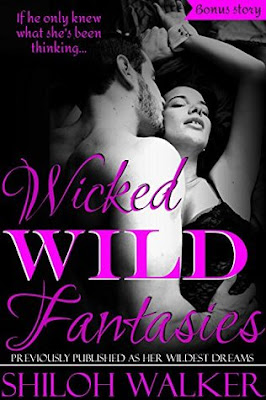 Always the wallflower, Alison Ryan is used to being ignored and pushed around. Everybody takes her for granted, even the strung-out would-be mugger who tried to steal her purse late one night. She can’t say who was more surprised when she stood up to him…the mugger, herself…or Detective Alex O’Malley, her brother’s best friend and the man she’s loved for most of her life.

When a little bit of comforting goes sideways, Ali ends up living out one of her most hidden fantasies, having Alex’s mouth on hers, his hands sliding all over her body.

The last thing Alex O’Malley expected was to wake up and find himself wrapped around his best friend’s baby sister. He’d just been trying to be a friend and he wakes up in wonderland. Before he could get his head wrapped around what’s going on, though, his mouth gets him in trouble and Alison takes off. Plagued by guilt and a need that just won’t quit, he keeps away from her.

When life has them crashing back together, Alex can hardly believe his eyes. The shy mouse who used to pretend she wasn’t staring at him is gone and in her place is a strong, sexy confident woman who isn’t afraid to take her life—and her needs—into her own hands.

Determined to convince her to give him a chance, Alex sets out to make her understand that he is the one man who can make all her wicked, wild fantasies come true.

Previously published as HER WILDEST DREAMS. This title has been extensively rewritten and revised. New material has been added and it has been re-edited. Also includes a bonus story, Hunt Me

Review:
Wicked Wild Fantasies was originally published with the title Her Wildest Dreams but the story has been revised and expanded before being published again with a new name. Having never read the original version I can't compare the two so this review is purely for the new version of the story.

Alison has always been the shy retiring wallflower and even though she has crushed on her older brother's best friend Alex for years she would never have dreamed of acting on it. Until the day she is mugged at knife point and Alex comes to her rescue, having seen her life flash before her eyes Alison suddenly starts to realise that if she doesn't make big changes life will just pass her by. When Alex's offer of comfort turns into something more passionate Alison is thrilled in more ways than one but seeing Alex's guilt kick in breaks her heart. She's still had the kick she needs to make major changes in her life though, she quits her job, gives herself a makeover and heads off to Ireland for an adventure. Two months later she's back and Alex barely recognises her, he hasn't been able to stop thinking about their encounter but this new, more confident, Alison attracts him more than ever.

For a quick hot read you can't go far wrong with a book by Shiloh Walker, she is great at ramping up the heat between her characters and you can always expect plenty of hot bedroom action in her stories. Although Wicked Wild Fantasies has been revised you can still tell it's one of her earlier works though, it's not quite as polished as her more recent stories and the character development isn't quite as good. This was an enjoyable story but I had to kind of ignore about how quickly Alison had done a complete 180 personality wise, it just didn't feel realistic that she would have changed so dramatically in such a short space of time. I also would have liked to have seen more of her and Alex spending time together outside of the bedroom, the time they did spend together was undoubtedly hot but I need a bit more than sexy times to make me believe that they're going to have a successful happily ever after.

If you're in the mood for something spicy with a hot, dominant cop who likes to take control in the bedroom then I'm sure you'll enjoy Wicked Wild Fantasies.