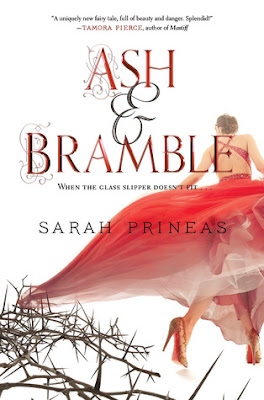 The tale of Cinderella has been retold countless times. But what you know is not the true story.

Pin has no recollection of who she is or how she got to the Godmother’s fortress. She only knows that she is a Seamstress, working day in and out to make ball gowns fit for fairy tales. But she longs to forsake her backbreaking servitude and dares to escape with the brave young Shoemaker.

Pin isn’t free for long before she’s captured again and forced to live the new life the Godmother chooses for her—a fairy tale story, complete with a charming prince—instead of finding her own happily ever after.

Sarah Prineas’s bold fairy tale retelling is a dark and captivating world where swords are more fitting than slippers, young shoemakers are just as striking as princes, and a heroine is more than ready to rescue herself before the clock strikes midnight.

Review:
Ash & Bramble is an imaginative retake on the Cinderella fairytale, it's not a straight retelling but instead it takes it's own path and turns everything you thought you knew on it's head. Let's just wonder for a minute where the fairytale Godmother gets her magic from. That pretty dress and beautiful glass slippers that appear at the swish of a wand - they had to come from somewhere right? Now let's imagine that the Godmother draws power from people playing roles in her stories and that she has a secret fortress where slaves are put to work to create all the props she needs to set the scene. Let's imagine that the Godmother captures unwitting passers by, wipes their memories and then puts them to work, either with a job inside her fortress sweat shop or with a role to play as part of a well known fairytale. People may realise that something strange is going on, they may not even like the role they've been given, but they are powerless to resist the lure of Story.

Pin wakes up one day with no memory of her past life, she is told that she is a seamstress and that it is her job to create whatever the Godmother asks for. She is given no name, she's not allowed to talk and she is beaten if she doesn't work hard enough. It's obvious to Pin from very early on that something is very wrong with the world she has found herself in, she may not remember her life before but one thing she knows for sure is that she's not willing to stay in the new life she's been given. Determined to escape and find the truth Pin puts a dangerous plan into action along with her only ally, a shoemaker who (rather unoriginally) calls himself Shoe.

I'm not going to give you any more information about what follows but if any of that makes you even slightly curious then you really HAVE to pick up a copy of Ash & Bramble. I had so much fun reading this story and loved the way Sarah Prineas turned the fairytale we all know and love completely on it's head. In fact, if you pay attention you'll spot nods to many more fairytales along the way although it's obvious that Cinderella is the main inspiration. This is a dark and twisted tale, one where the bad guys might end up winning and I was constantly surprised by the twists that the author threw in.

There is a sweet romance between Pin and Shoe but that's never the main focus of the story, their feelings start to develop quite quickly but it didn't really bother me because of the situation they were in. I think in those circumstances you'd be quick to latch on to anything or anyone that offered a little comfort and I liked the way things developed between them as the story continued. I've seen people mention a love triangle in their reviews but it never really felt that way to me, yes there is a third guy introduced, obviously you can't have a Cinderella story without Prince Charming, but Pin knew all along that any feelings she had towards the prince were forced due to Story and she never really trusted them. I would have liked a little more background information, especially when it came to how the Godmother's powers worked and why she needed the Story to keep going, but I still thoroughly enjoyed reading Ash & Bramble. This was my first book by Sarah Prineas but I can definitely see why she's so popular and will be checking out more of her work in the future.