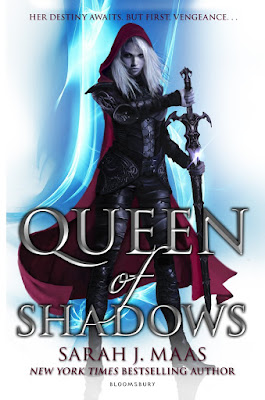 Everyone Celaena Sardothien loves has been taken from her. Now she returns to the empire – to confront the shadows of her past . . . The fourth breathtaking instalment in the New York Times bestselling Throne of Glass series.

Bloodthirsty for revenge on the two men responsible for destroying her life, and desperate to find out if the prince and his captain are safe, Celaena returns to Rifthold, the seat of so much evil. She has accepted her identity as Aelin Galathynius, Queen of Terrasen. But before she can reclaim her throne, there are dark truths to learn and debts to be paid. Aelin must stay hidden beneath her assassin's hood and draw on her mortal strength as Celaena to prevent the King of Adarlan from tearing her world apart. Only then can she fight for her people.

Readers will be held rapt as Celaena's story builds to an agonising crescendo, packed with heart-pounding action and swoon-worthy romance.

Review:
Queen of Shadows has been a really hard book to review (I've been trying to write this for a long time!) because there were things I both loved and hated about this story. I've been a fan of the series from the beginning and if you've read any of my previous reviews you'll already know who I've been shipping for Celaena/Aelin to end up with (don't look unless you've already read this book or you'll end up with potential spoilers!) so I was gutted by the complete turn around in this story. I know it's not the end of the world when your ship doesn't work out, and to be honest it's not like I don't like the new love interest, but this comes out of nowhere. Someone we've known for a very long time acts completely out of character for well over half the book and Aelin's reactions to him are also very odd. Then the new love interest is someone who I never even considered as a possibility (and there have been several possibilities in the earlier books so I wasn't only focused on one guy!) so it just didn't sit right with me.

It was pretty damn obvious from very early on where Sarah J Maas was taking things but it didn't happen organically and felt very forced, almost like she'd discovered a new favourite character and had to shoehorn him into the position she wanted him in because there wasn't really a space already waiting for him. Anyway, I'll get over my shipping disappointment and I'm glad that my well loved character was acting more like his normal self by the end of the book but I no longer trust Sarah J Maas with my poor broken heart and with another couple of books left before the series ends I'm refusing to get invested in any relationships Aelin has until the final couple of chapters of the very last book because I don't want the rug pulled out from under me again.

So now I've mentioned my very negative reaction let's talk about why I loved the rest of the book. One thing this series has always had is strong female characters, Aelin and Mannon are the most notable but there was also Nehemia and some of the other witches. In Queen of Shadows we get to meet a few more, the most surprising of which was probably Lysandra. If you've read the prequel novellas you'll probably be very surprised by her character's story arc but it was definitely a positive storyline. We also get to meet Aelin's cousin Elide who is now one of my favourite characters. When the plot had gone a little south on Aelin's side with her strange behaviour and her new googly-eyed suitor it was the witches that pulled me through. I've loved Mannon and Abraxos since they were first introduced but adding Elide to their group just made their storyline even better. There is actually a huge amount going on with the witches right now and Mannon is going to have to start making some important decisions very soon.

While the witches are off fighting their own battles Aelin is doing her best to help Chaol rescue Dorian. I have to admit Dorian's story was heartbreaking, we get a few scenes from his point of view and it was horrendous to see how much he was suffering. It honestly doesn't look like there is any hope for him and it just proves how far the king is prepared to go to keep his crown. I'm not going to say much more about the plot but there was plenty of action and some very important developments to the overall world that are going to have a huge impact on the series from this point onwards. I'm definitely pleased with the way things are going and I'll be devouring future books the minute I can get my hands on. This isn't a series for the feint hearted, Sarah J Maas doesn't shy away from toying with our emotions, she is happy to kill off well loved characters and she loves to shake things up to upset the balance. You honestly never know what she'll do next and as much as that can make these books hard to read it's also one of the reasons they're so much fun.